Posted on 11-January-2014 by mathscinotes

History is a tool used by politicians to justify their intentions.

I have been rather frustrated lately with the number of field failures I have encountered that are related to the humble cable tie (Figure 1 – Source). 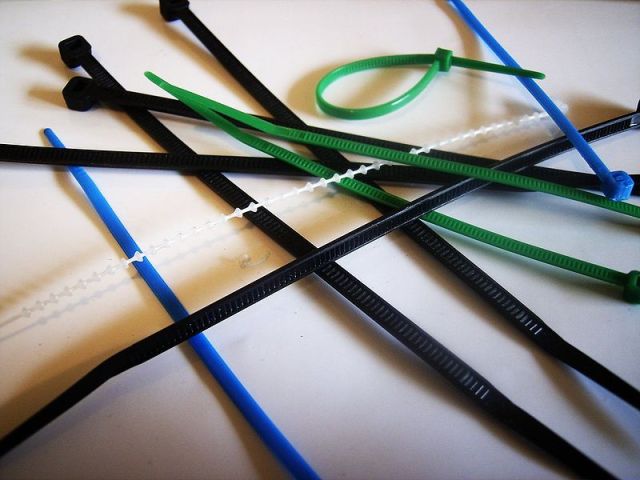 There are several problems related to cable ties.

I started to look around for good examples of cable rigging that did not use cable ties. I soon found that the folks at NASA have done some very nice rigging on their Mars rovers. Figure 2 shows one example. For a great discussion of rigging for Mars, see this forum discussion.

It is not hard to believe that NASA understands cable rigging. They have had some issues in the past and they learn from their mistakes (e.g. Space Shuttle and Apollo 1).

I have found some good aerospace reference material on rigging that I want to make more readily available. These methods seem very reasonable to me.

I will be using these standards in my engineering group for guidance. There are a number of vendors that put out rigging supplies. Here is one vendor recommended in the forum of Guild of Knot Tyers.

There is also some good material put out by the telecommunications companies — some of this material is over 100 years old (Old 50 MByte Telephone Spec). For example, Figure 3 shows an approach from this old material that I still occasionally use.

Figure 3: I Often Use This Approach to Cleaning Finish the End of A Cable.

In the old days, they even referred to sewing cables together (Figure 4).

On a personal note, I am a big knot person. Studying knots and their application have been a recreational activity of mine for years.

This entry was posted in Electronics, Personal. Bookmark the permalink.