— I heard this joke on the radio.

I frequently hear people make comments about the data bandwidth required for HDTV on home data networks and the levels of compression used for HDTV broadcasts. I usually hear two numbers cited:

These numbers are important for engineers because data bandwidth drives the design of networks, and compression ratios drive image quality. I thought it might be useful to review the bandwidth requirements of HDTV and the level of compression involved. I looked around on the web for this data and I could not find the level of detail that I wanted -- I will put it here.

As part of my job, I actually encountered one person who regularly watches 14 simultaneous HDTV feeds. He is a stock trader who works out of his home. He was displaying stock data from multiple markets on multiple televisions. Think about it -- 14 · 20 Mbps = 280 Mbps of television being watched by one person.

What is a Pixel?

A pixel is the smallest addressable unit on a video display. Figure 2 (Source) illustrates how each pixel is composed of three color-generating components, called sub-pixels. At the display, each pixel is commanded to generate a combination of different red (R), green (G), and blue (B) color intensities. 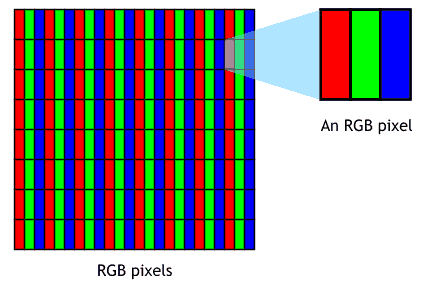 Figure 4 shows how a simple color image is formed by varying the pixel color mixture.

What are Luma and Chroma?

At the display, we need RGB intensities in order to drive the sub-pixels. It turns out that RGB is not the most bandwidth efficient way to transfer pixel information. It has been recognized since the early days of television that a more bandwidth efficient approach is to restate RGB in in terms of luma and chroma, which are defined as follows:

In summary, the advantages of representing RGB in terms of luma and chroma are simple:

In North America, calling a televised image "HDTV" generally means that the image has the following characteristics:

We can use this information to compute the total number of pixels using the method shown in Figure 5.

Figure 5: Calculation of the Total Number of HDTV Pixels.

HDTV Transmission Over a Wire Pair

Given the discussion above, we can calculate the HDTV bandwidth at the camera (i.e. wire-transfer) as shown in Figure 6.

So Figure 6 tells us that the raw bandwidth out of a camera is just about 1 Gbps.

There is some basic information needed to understand how HDTV is broadcast. First, everything is packed into a 6 MHz bandwidth, which is the bandwidth of a standard North American television channel. Because some of that bandwidth is used for a pilot tone and for filter transition regions, only part of the 6 Mhz bandwidth can be used for data. The basic bandwidth allocation is illustrated in Figure 7.

Figure 7: Allocation of Image Bandwidth in a 6 MHz Channel.

Television standards state that the total bandwidth (i.e. information + pilot tone + transition regions) of the television channel is 11.5% greater than the information bandwidth. The 11.5% factor is usually called α. This number goes way back to the old NTSC standard.

Once we have all the pixel data, there is some overhead involved in packing the image data into the 8VSB transport protocol. This overhead is illustrated in Figure 8.

Figure 9 illustrates the actual calculation of the actual image bits available from a broadcast HDTV picture.

I was able to show the assumptions involved when people state that HDTV requires 19.3 Mbps of data bandwidth and it has a compression ratio of about 50. If you look carefully at the calculations, you can see that HDTV bandwidth will be increasing in the future as the color sampling resolution increases from 8-bits to 10-bits and the real refresh rate increases to 60 Hz.

Figure 10 shows a slide from a video presentation by Sarnoff Corporation that mentions the 19.3 Mbps BW.