Posted on 26-February-2013 by mathscinotes

The best argument against democracy is a five-minute conversation with the average voter. 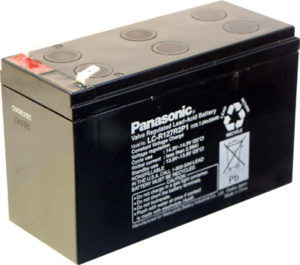 Figure 1: 7.2 A-hr Sealed Lead Acid Battery
(Source). This battery is a workhorse products
for many markets, including telecom and home
security.

I live in a cold climate -- so cold that under certain circumstances we can freeze our lead-acid batteries (Figure 1). A customer who lives in my region called recently and was wondering if I thought any of his batteries would have frozen over the winter. A number of his Internet service subscribers have vacation homes that are unoccupied over the winter. All of these vacation home owners turn off their AC power for the winter. Since all of our Optical Network Terminals (ONT) are connected to Uninterruptible Power Sources (UPS), they will begin operating off of their battery when the AC power goes away. If the home owner does not disconnect the battery, the ONT will run discharge the battery. This is important because a discharged battery will freeze -- a charged battery will not freeze. A battery that has been frozen is very likely a dead battery and you will need a replacement battery.

This EXACT situation just happened to my son. He now must ensure he drives the car every few days to keep the battery charged.

Let's examine why my ONT customers need to worry about discharged batteries over the winter.

Lead-acid batteries contain a solution of sulfuric acid (H2SO4) and water -- the solution is referred to as the battery's electrolyte. Adding a solute (in this case, H2SO4) to a solvent (in this case, H2O) will lower the freezing point of a solution. A fully charged battery has more H2SO4 than a discharged battery. The additional H2SO4 depresses the freezing point of the batteries electrolyte to around -70 °C. This is a temperature we do not see in Minnesota. However, a discharged battery's freezing point rises to ~-10 °C. Unfortunately, the temperature in Minnesota frequently drops below -10 °C.

This blog post is going to focus on presenting empirical data. However, I do want to spend a bit of time discussing the various ways of expressing the concentration of battery acid.

There are three common ways of expressing the concentration of battery acid.

The mass fraction and molality are related by the equation $latex m=\frac{w}{{MM\cdot \left( {1-w} \right)}}&s=-1$, where MM is the molar mass of the solute (98 grams/mol for H2SO4). Specific gravity can be used to relate mass fraction to molarity (symbolized by M) by the equation $latex M=\frac{w \cdot SG\left( w \right)}{MM}&s=-1$, where SG is assumed to be equal to the solution's density (close enough for most applications). I do not see molarity used by battery people, but chemists use it all the time. I cover these formulas in more depth in this post.

Figure 2: Voltages During Charging and Discharging for a 12 V Battery.

Because of the variation in battery terminal voltage with charge or discharge current, I will plot (Figure 3) the open-circuit terminal voltage. This will make the graph simpler.

I have dealt with this issue for a number of years. I thought it was worth documenting why the UPS batteries can freeze. The solution is simple -- disconnect the charged battery from the UPS. A lot of other things will freeze (e.g. the water/anti-freeze mixture often used to winterize vacation home plumbing) before that charged battery will freeze.

To cross-check my information, I also consulted additional sources, which I document here.

In addition to the data presented in Figure 2, I also used the following table from Vinal's "Storage Batteries". (Google Books Reference) 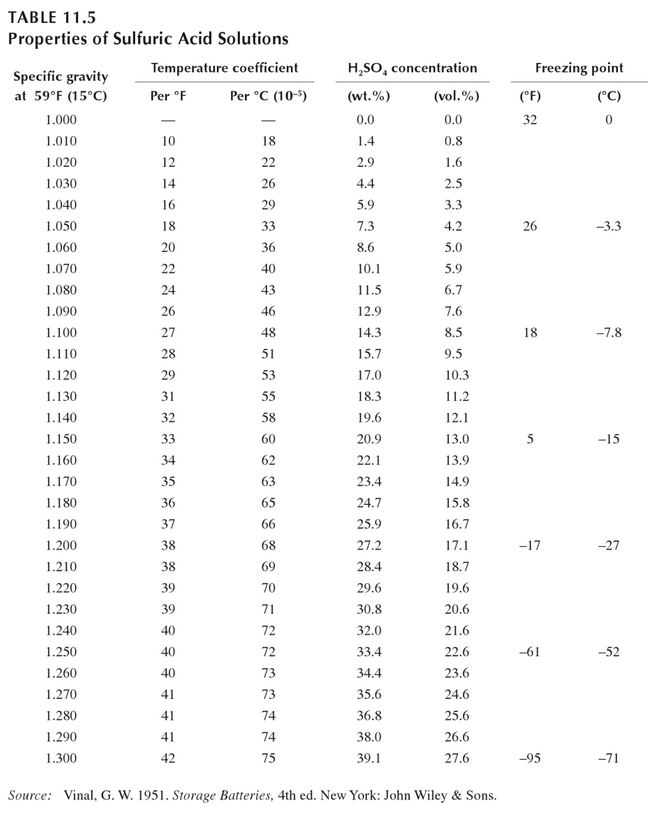 I consulted numerous sources to corroborate the data presented here. Figure 5 shows data from Sandia, which has gathered together a surprising amount of lead-acid battery data. 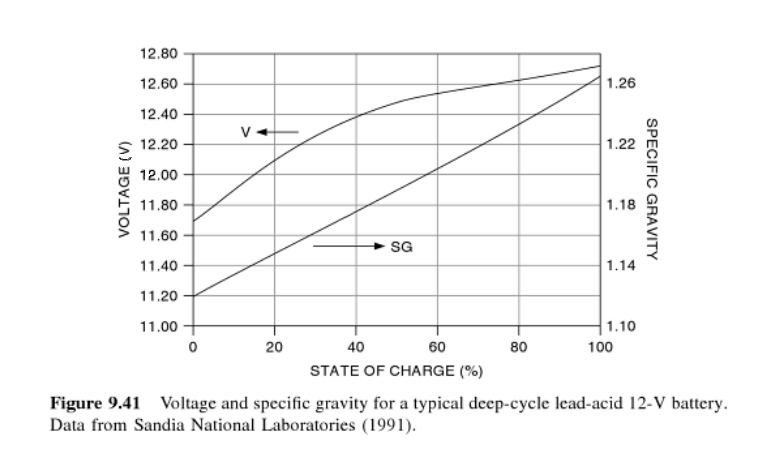 Figure 5: Specific Gravity, Terminal Voltage, and State of Charge Data (Sandia Labs). A 12 V battery has 6 cells. To derive the cell voltage, I divided the terminal voltage by 6.

To simplify comparison with Figure 3, I will reformat the Sandia data so that the state of charge and cell voltage are functions of specific gravity (Figure 6). 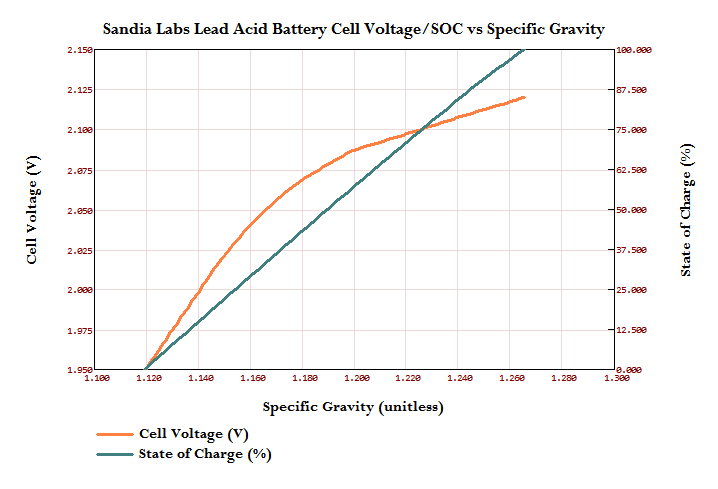 Figure 6: Sandia Data Reformatted As a Function of Specific Gravity.

The data in Figure 5 is similar to that shown in Figure 2. Since this is empirical data, I expect some differences between sources. If you are curious about how I generated Figure 5, see the Mathcad and PDF file here.

Figure 6 shows another set of data. This data is also consistent with the other data sets I found. 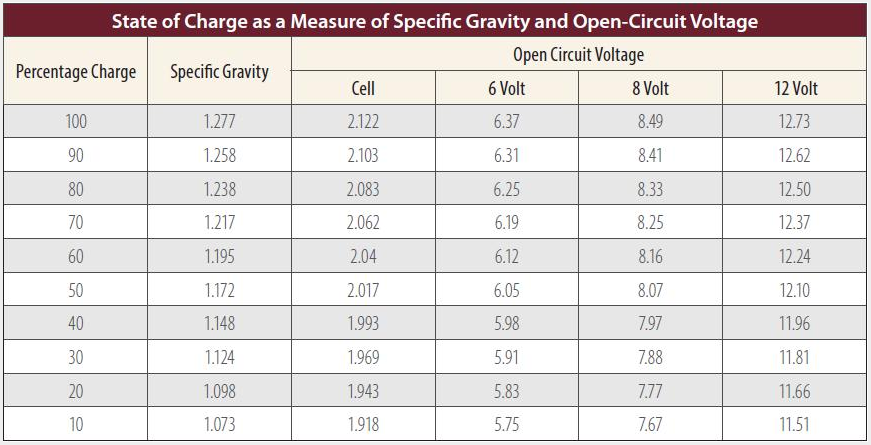 This entry was posted in Batteries, Electronics and tagged battery, electronics, lead acid. Bookmark the permalink.