Posted on 20-February-2013 by mathscinotes

I write a lot of programs and I can’t claim to be typical but I can claim that I get a lot of them working for a large variety of things and I would find it harder if I had to spend all my time learning how to use somebody else’s routines. It’s much easier for me to learn a few basic concepts and then reuse code by text-editing the code that previously worked. 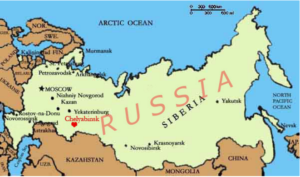 A meteor exploded over Chelyabinsk, Russia (Figure 1), at 3:20 UTC on February 15, 2013. I have been reading accounts of the size, speed, and energy of the meteor. This post presents some simple calculations that verify the consistency of the expert's estimates on the meteor characteristics. Also, I thought it would also be interesting to look at the amount of overpressure required to cause the sort of damage that was seen after the meteor and to include some explanatory material as to how scientists determine the characteristics of a meteor.

This meteor entered the Earth's atmosphere without warning. There are a number of reasons why it was not detected earlier. One reason is that it came from the direction of the Sun, which generates so much glare that it is difficult to see meteoroids coming in from that direction. Figure 2 illustrates its trajectory (Source). There is a program, called Sentinel, that will be attempting to place a telescope near the orbit of Venus that will allow us to see some meteoroids coming from the direction of the Sun by 2017.

Figure 2: Trajectory of the Chelyabinsk Meteor.

Coincidentally, asteroid 2012 DA14 passed by 16 hours before. Figure 3 shows another view of the orbits (Source).

Figure 3: Orbits of Asteroid 2012 D14 and the Chelyabinsk Meteor.

There are numerous articles quoting different size and energy estimates. If you want to see how these characteristics are determined, see this document on how the meteor characteristics were determined for the Tagish Lake fireball in Canada. It is a bit technical, but does provide a complete description of the meteor analysis process.

Another press report stated the iron content of the meteor is 10 %, which is consistent with a ordinary chondrite meteor type H. Given this information, we can proceed to cross-check these figures.

Using the meteor mass and density numbers from above, we can compute an estimate for the meteor diameter using the approach shown in Figure 5.

Figure 5: Calculations for the Meteor Diameter.

My estimate of 16.8 meters for the meteor diameter is in the 15 meter to 17 meter diameter range stated in the JPL press release.

The Cold War left us with an infrastructure for measuring meteor characteristics as part of the Comprehensive Test Ban Treaty Organization. These folks run a network of sound sensing stations that can detect nuclear blasts. They can also track meteors, which gives us velocity information, and they can estimate the energy of the meteor by the loudness of the explosion. My calculations in Figure 6 show that the reported energy value of 500 kilotons and the meteor's velocity and mass estimates are consistent.

Figure 6: Calculations for the Kinetic Energy of the Meteor.

You do occasionally hear news about these world-wide sensor networks for monitoring nuclear test ban compliance in contexts other than meteors (e.g. the Vela Incident).

Overpressure (or blast overpressure) is the pressure caused by a shock wave over and above normal atmospheric pressure. The shock wave may be caused by sonic boom or by explosion, and the resulting overpressure receives particular attention when measuring the effects of nuclear weapons or thermobaric bombs.

If you want to get some insight into the power of an air burst with energy comparable to a nuclear weapon, look at the following video of a UK nuclear test for a 1.8 megaton air burst (altitude = 8000 feet) at a range of 20 miles (Figure 7).

Since the meteor blew out many windows and did some minor structural damage, we can estimate the amount of overpressure on the ground using data from Table 1 (Source), which gives an idea of the level of damage that can be generate by the overpressure associated with an air burst.

This was just a quick look at some science in the news. For more information on meteor air bursts, see this post.

This entry was posted in Astronomy, Electronics. Bookmark the permalink.