Posted on 8-December-2013 by mathscinotes

Nothing can be of value without being an object of utility.

I was listening to an astronomer on the radio answering questions on viewing stars and planets. A question was asked about why we can have beautifully detailed photos taken from Earth of distant astronomical objects (e.g. Crab Nebula) but we cannot seem to obtain detailed photos of objects in our solar system like Pluto (Figure 1). The astronomer answered that the distant objects are huge and that we view them from Earth as having a larger viewing angle than a minor planet in our solar system. I thought it might be interesting to look at the relative viewing angle of these two objects when viewed from Earth.

Figures 2 and 3 show pictures of Pluto and the Crab Nebula. Notice how the picture of the Crab Nebula appears to be much more detailed than that of Pluto.

Dwarf Planet
A celestial body in direct orbit of the Sun that is massive enough for its shape to be controlled by gravitation, but has not cleared its orbital region of other objects (Source).
Minor Planet
A minor planet is an astronomical object in direct orbit around the Sun that is neither a planet nor originally classified as a comet. Minor planets can be dwarf planets, asteroids, trojans, centaurs, Kuiper belt objects, and other trans-Neptunian objects (Source).
Planet
An astronomical object orbiting a star or stellar remnant that is massive enough to be rounded by its own gravity, is not massive enough to cause thermonuclear fusion, and has cleared its neighboring region of planetesimals (Source).
Viewing Angle
Angle of view describes the angular extent of a given scene that is imaged by a camera.

I will compare the visibility of Pluto and the Crab Nebula by comparing their viewing angle from Earth. Let's define viewing as shown in Equation 1.

Figure 4 shows my calculations of the viewing angles for Pluto and the Crab Nebula. 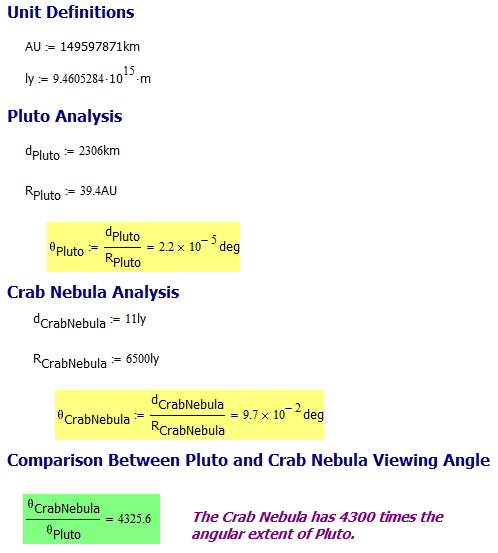 I had never thought about the difficulty of observing small objects in our solar system. I learned that those spectacular photographs we see from telescopes like the Hubble Space Telescope are of very large objects. Even with our largest instruments, the small, dark objects that occupy our solar system are very difficult to photograph in detail.

One Response to Difficulty of Viewing Dwarf Planets