Posted on 15-December-2014 by mathscinotes 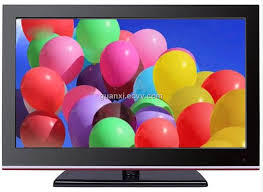 Figure 1: HDTV is now the norm.

Everyday, I work on delivering fiber-based, video access equipment to service providers. The increased demand for High-Definition Television (HDTV, Figure 1) has increased the need for fiber in the video distribution network. Today, fiber optic cable is often used to deliver the video signal to "green yard furniture" (Figure 2) in local neighborhoods that convert the light to electrical form for distribution using copper-based technologies, like cable TV or DSL. 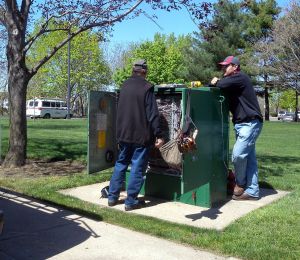 Increasingly often, optical fiber is being used to deliver the video directly to the home – this is the focus of my work. As part of preparing some tutorial material on video distribution, I needed to explain how these distribution networks are configured. There was some interesting math involved in this work that I thought would be interesting to share here.

In this post, I will look at how optical video transmission performance is determined by two key parameters, composite RMS OMI and channel peak OMI (defined below). These parameters are difficult for customers to understand, but critical to the performance of their networks.

A relationship will be determined between these two parameters that is used every day in my lab to setup video systems. This analysis will uses some basic probability theory and  calculus to derive a useful result.

There are two basic types of video transmission:

This post will focus on the RF-based approach. This approach is becoming less common, but there are still tens of millions of people who watch TV using this technology.

I have been told every year over the last 15 years that RF-based video is going to die in the next two years. I expect to retire in ten years with tens of millions of people still watching RF-based video. Change comes slowly in the access network.

Carrier-to-Noise Ratio (CNR)
CNR is the carrier power-to-noise power ratio and it is the primary quality metric used with respect to analog video. For the purposes of this article, you should think of CNR and SNR as being synonymous – technically they are different, but are close enough that we will not draw a fine distinction. If you want more details on the difference, see this note. The higher a channel's CNR, the better the video quality.
Clipping-Induced Distortion
Video distribution works by electrically summing a large number of channels (~100) and feeding this sum into the front-end of a laser. The laser generates optical power that is directly proportional to its electrical input. However, optical power can never be negative in value, but an electrical signal can be negative. To avoid this issue, the laser is "biased" to generate a constant output power level with zero electrical input. In this way, we can use a non-negative parameter like power to represent a signed value like electrical voltage. However, it turns out that the electrical signal can randomly have negative values so large that its the sum of electrical signal can be negative and the laser generates zero output power when the input is negative. Figure 4 illustrates this situation.

In theory, you could make the laser bias large enough to ensure that the input cannot be negative. However, there are limits to the amount of power you can transmit down a fiber because of nonlinearities like SBS. Also, higher laser power means MUCH higher cost.

The loss of signal, while short, creates a distortion in the television signal. We refer to this distortion as clipping-induced distortion.

Channel Peak OMI (symbol m)
m represents the ratio of maximum optical power deviation (one-sided) for a single channel to that channel's total optical power. The larger m, the higher the CNR of that channel. We can describe it mathematically as follows.

Most cable systems support two OMI levels: one for analog channels and one for digital channels. QAM256 is the most common type of digital channel and it is usually set at 50% of the analog level.

The factor of two appears because the channel peak OMI must be converted to an RMS value for the composite calculation. If all the OMI values are the same (e.g. an all analog system), then

For this analysis, I am going to assume that the system performance is limited by clipping-induced distortion. Figure 5 shows my derivation for the power that was clipped from the original signal (highlighted in yellow).

The equation highlighted in yellow is well-known in the industry as the Saleh equation (ref: A. A. M. Saleh. Fundamental limit on number of channels in subcarrier-multiplexed lightwave CATV system. Electron. Letters, 25(12):776-777, 1989). You will sometimes see this equation in a slightly different form (see Appendix B).

Clipping-induced distortion is only one of a number of noise source in a video system (e.g. RIN, thermal, shot), but it is often a dominant one. Figure 7 shows an example of OMI calculations for a commonly used system configuration consisting of:

The calculation shows that we just meet our minimum requirements with 80 analog and 33 digital channels.

I frequently am asked why RF-based video has to be setup a certain way or it just does not work well. Hopefully, these calculations show where some of the odd ball formulas come from and that deriving them is not simple.

We generally test the AM-VSB channels using a unmodulated carriers. We can model the optical power present in this test configuration as shown in Equation 2.

Equation 2 can be thought of as using optical power to represent the voltage of the original television signal, i.e.

, where vVideo(t) is the voltage of the original television signal.

The optical receiver contains a photodetector that generates a current proportional to the input optical power. This means that we can express the detector's output current as shown in Equation 3.

In general, there are on the order of 80 analog video channels multiplexed on a single laser output. We can think of vReceived(t) as the sum of a large number (~80) independent, identically distributed, random variables. Because of the central limit theorem,  vReceived(t) is well-modeled as a Gaussian random process with mean R·P0 and variance of

(the variance equals the signal power). Note that the channel power x(t) does not enter into this equation because its mean value is defined to be 1.

We define the composite modulation index (µ) as the standard deviation (σ) normalized to the signal mean of vReceived(t), R·P0, which I show in Equation 4.

Appendix B: Another Form of Saleh Equation

Some folks like to express CNR as a negative dB value and with a numeric constant for a leading coefficient (example). Figure 7 shows how to derive this expression.

This entry was posted in Fiber Optics, optics. Bookmark the permalink.