When you drink from the well, remember those who dug the well. 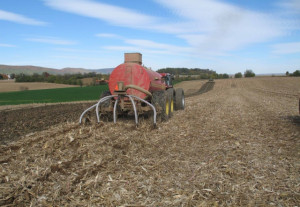 I sometimes wonder if you can learn anything from television, but I recently saw an article in our local paper about a medical condition threatening a local town that I had first learned about on "Untold Stories of the ER" (USER).

The USER segment was called "Blue Baby Syndrome" and it was about a 1 year old baby that developed a condition called methemoglobinemia, which can occur when drinking well water contaminated with nitrates – often by a local farmer's fertilizer. I have always wondered if fertilizers could contaminate well water and it turns out they can.

The Wikipedia defines methemoglobinemia as follows.

Methemoglobinemia is a disorder characterized by the presence of a higher than normal level of methemoglobin .... This leads to an overall reduced ability of the red blood cell to release oxygen to tissues, with the associated oxygen–hemoglobin dissociation curve therefore shifted to the left. When methemoglobin concentration is elevated in red blood cells, tissue hypoxia can occur.

Here is a short excerpt from the show.

The doctors did some nice detective work discovering that the baby was being exposed to nitrates in the water it was receiving in its formula.

While I saw the television show a few years ago, the article I saw was in one of our local newspapers (link) on the exact same problem being faced by an small Minnesota town.

A frequent reader told me that when his mother was raising kids on the family farm in southern Minnesota many decades ago, local doctors warned the locals not to give babies well water for this exact reason.  Apparently, it was well known a long time ago that well water contaminated with fertilizers was very bad for babies.

This entry was posted in Health. Bookmark the permalink.