Drying Up the Mediterranean

Posted on 22-August-2015 by mathscinotes

When you repeat a mistake it is not a mistake anymore: it is a decision. 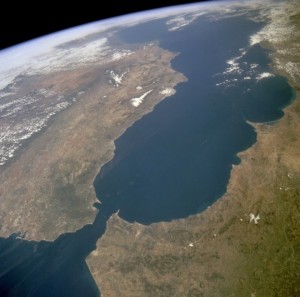 Figure 1: Strait of Gibraltar and the Mediterranean.

In an effort to get some exercise,  I walk every night, even in the middle of winter. To keep my mind occupied while walking, I listen to audio books. One of my favorite audio books is titled  The Earth: A Very Short Introduction (link). This book provides an excellent overview of basic geophysics. It is not a book about rocks, but rather a book about the structure of the Earth.

This book contains an excellent discussion of the Mediterranean's periodic drying  episodes that are collectively known as the Messinian Event, which occurred five million years ago during the Miocene era. There is one quote from the book  that caught my ear:

In the 1970s the ocean drilling programme came to the Mediterranean. There, the drill cores reveal something sensational. I was shown one of them where it is now stored at the Lamont Doherty Geological Observatory of Columbia University in New York. It consists of layer after layer of white crystalline material, a material of salt (sodium chloride) and anhydrite (calcium sulphate). These evaporite layers can only been formed by the Mediterranean drying up. Even today, evaporation rates are so high that, were the Straits of Gibraltar sealed off, the entire Mediterranean would evaporate in about 1,000 years. The implication of the hundreds of metres of evaporite in the drill cores are that this must have happened perhaps 40 times between 5 and 6.5 million years ago. When the scientists drilled close to the strait of Gibraltar, they encountered a chaotic mixture of boulders and debris. This must have been the giant plunge pool of the world's greatest waterfall, when the Atlantic broke through past Gibraltar to refill the Mediterranean. We can only imagine the roar, the spray, the power of the water.

I find the whole idea of the Mediterranean drying up multiple times in a relatively short time amazing. Let's take a closer look at this statement.

We need a few pieces of information to work this problem.

I arbitrarily chose 188 cm/year for my water evaporation rate.

Figure 2 shows my analysis. I looked at the rate evaporation time with and without rain or river water contributions. 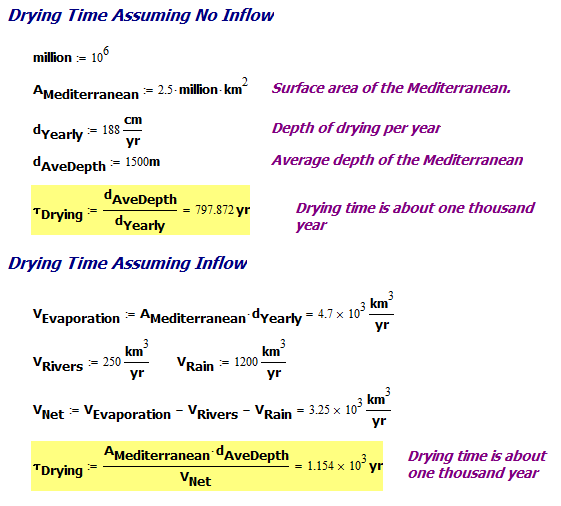 I was able to confirm that the drying time is about one thousand years.

I recall reading something about the Mediterranean having dried up back when I was in grade school. The reading quoted a Russian geologist working on the Aswan High Dam in Egypt. He said that there were geological signs near the dam that indicated that there once was a waterfall near the mouth of the Nile during the Miocene era. This would be consistent with the Mediterranean being dry.

Appendix A: Quotes on Mediterranean Drying

The following quote from the book Environmental Condition of the Mediterranean Sea: European Community Countries (link).

I found numerous references to the one thousand year drying time on the web. Here is another example (citation at the bottom of the quote).

"Only the inflow of Atlantic water maintains the present Mediterranean level. When that was shut off sometime between 6.5 to 6 MYBP, net evaporative loss set in at the rate of around 3,300 cubic kilometers yearly. At that rate, the 3.7 million cubic kilometres of water in the basin would dry up in scarcely more than a thousand years, leaving an extensive layer of salt some tens of meters thick and raising global sea level about 12 meters." Cloud, P. (1988). Oasis in space. Earth history from the beginning, New York: W.W. Norton & Co. Inc., 440. ISBN 0-393-01952-7

The following quote from the book Can Squid Fly (ISBN 1408151308) contains the following useful passage.

Did the Mediterranean really dry up once?
Yes, about 6 million years ago; and in the unlikely event that the Strait of Gibraltar became blocked up, the Mediterranean would dry out again in a matter of a thousand years or so.

The reason is that the Mediterranean is a strange and interesting, sea, with a very curious water budget – that is, the balance between the incoming and outgoing water. The sea was formed about 20 million ago when the African tectonic plate collided with the Eurasian plate, enclosing a great expanse of sea between them. First, the eastern end closed up when present-day Arabia collided with what became Turkey and Iran, leaving the Persian Gulf between them. What is now the Red Sea was already in existence between Arabia and north-eastern Africa, but there was no connection with the eastern Mediterranean. Some time later, the western end closed and the drying out process began because the water balance situation was, if anything, even more extreme than it is today.

The modern Mediterranean has a total surface are of about 2.5 million km2 (1 million square miles) and a mean depth of 1500 m (5000 ft). This gives it a volume of about 3.75 million km3 (900,000 cubic miles). The annual water loss by evaporation from its surface is about 4,700 km2 (1,130 cubic miles). About 1,200 km3 (300 cubic miles) falls back as rain each year, but the Mediterranean has few major rivers apart from the Rhone, the Nile, and via the Black Sea, the Danube. Consequently, the total annual supply from all river sources is only about 250 km3 (60 cubic miles), leaving a net annual deficit of some 3,250 km3 (770 cubic miles). This deficit is made nowadays made up by the Atlantic water entering the Mediterranean in the form of a strong and almost continuous-eastward-flowing surface current through the Strait of Gibraltar. In fact this input is so large that there is a smaller, but very significant, outward flow of the Mediterranean water the surface current.

This quote indirectly indicates that the evaporation rate is 188 cm/yr. Figure 3 illustrates the calculation.

Appendix B: Flow Through Strait of Gibraltar

The Environmental Condition of the Mediterranean Sea (ISBN 9401581770) contains the following paragraph that lists the water flow through the Strait of Gibraltar.

The water input into the Mediterranean from run-off is 455E9 m3 per year while the net input through the Strait of Gibraltar amounts to 2500E9 m3 per year. Of the 154E9 m3 drawn off and used per year, 72% is used for irrigation, 10% for drinking water and 16% for industries (including thermal power stations) not linked to the domestic supply. The 4 EC countries account for 61.6% of the freshwater supply and 57.5% of the freshwater demand.

Figure 4 shows how you can use Hargreaves' formula to estimate the evaporation rate from the Mediterranean. I made the best estimates I could for some of the parameters required by the formula.

For a much more detailed discussion on predicting evaporation rates, see this document. 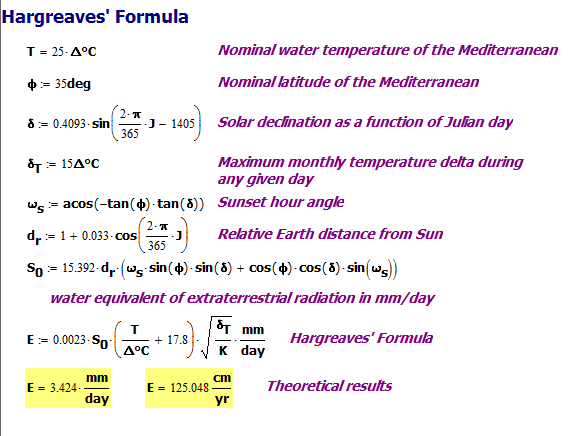 Figure 4: Estimate of the Nominal Evaporation Rate of the Mediterranean Using Hargreaves' Formula.

This entry was posted in General Science, Geology. Bookmark the permalink.

1 Response to Drying Up the Mediterranean