Never interrupt someone doing something you said couldn't be done. 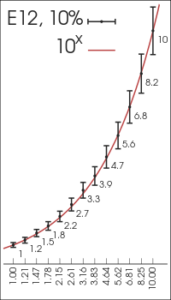 Figure 1: Plot of the E12
Series of Resistors (Source).

I have been designing circuits with resistors since I was a kid working on science fair projects – I still remember building my first Radio Shack photocell project. While I have always thought of resistors as simple devices, I recently discovered that I have been laboring under a misconception about the standard resistor values.

Until last week, I believed that the values of the E-series standard resistor values were selected to ensure that if I needed a resistor within x% of a specific value, I simply needed to choose a resistor from the  x% tolerance set. For example, Figure 1 shows the E12 series (i.e. ±10%) values – notice that each tolerance range overlaps the adjacent ranges. This means that you can always find an E12 resistor value within 10% of your required value.

I was a bit surprised that I could not find an E48 value (±2% tolerance) within 2% of my design value. I was so surprised that I stopped what I was doing and learned how the E-series of standard resistor values were determined. It was an interesting side trip that I thought was worth discussing here.

When can you find an x% resistor within x% of a specific value? The answer is "it depends …"

Tolerance
In engineering, tolerance is the permissible limit or limits of variation in some parameter of a system or component (Source). Tolerance is often, but not always, expressed as the percentage of variation permitted from a specified value. All system parameters are subject to random variation, and the designer must deal with it.
Relative Percent Error (AKA Approximation Error)
The relative percent error (symbol δ) in the percentage discrepancy between an exact value and some approximation to it (Source). We normally compute the relative percent error with the equation $latex \delta =100\cdot \left| {\frac{{{{x}_{{approx}}}-x}}{x}} \right|&s=-1$, where x is the desired value and xapprox is the approximate value.
Preferred Number
Preferred numbers are standard guidelines for choosing exact product dimensions within a given set of constraints (Source).
Renard Numbers
Renard's system of preferred numbers, adopted in 1952 as international standard ISO 3, divides the interval from 1 to 10 into 5, 10, 20, or 40 steps. The factor between two consecutive numbers in a Renard series is approximately constant (before rounding), namely the 5th, 10th, 20th, or 40th root of 10 (approximately 1.58, 1.26, 1.12, and 1.06, respectively), which leads to a geometric sequence. This way, the maximum relative error is minimized if an arbitrary number is replaced by the nearest Renard number multiplied by the appropriate power of 10 (Source).
E-Series
In electronics, IEC 60063 defines a preferred number series for resistors, capacitors, inductors, and Zener diode voltages that subdivides the interval from 1 to 10 into 6, 12, 24, 48, 96, and 192 steps (similar in approach to the Renard numbers). These subdivisions ensure that when some arbitrary value is replaced with the nearest preferred number, the maximum relative error will be on the order of 20%, 10%, 5%, 2%, 1%, 0.5% (Source).

The yellow highlighted text is the important thing here – the maximum relative error only roughly corresponds to the tolerance – you are not guaranteed to have a preferred number within the tolerance range of the resistor series. 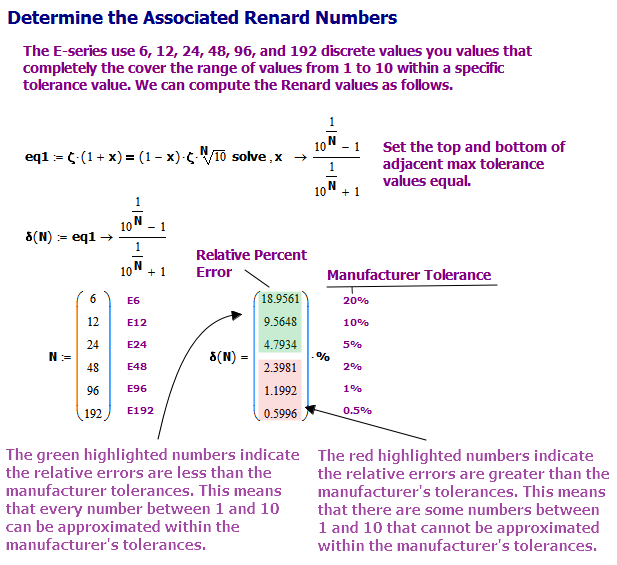 E6 Example Showing Full Coverage From One to Ten 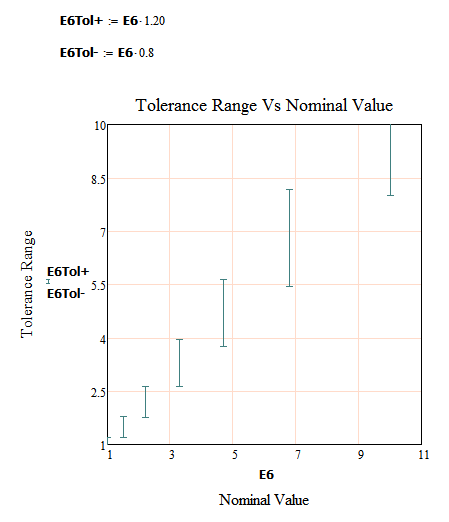 E48 Example Showing Gaps For Some Numbers Between One and Ten

Figure 4 shows graph similar to Figure 3, but for the E48 series (±2%). It is difficult to see at this scale, but there is not a standard value for every value from one to ten within 2%. 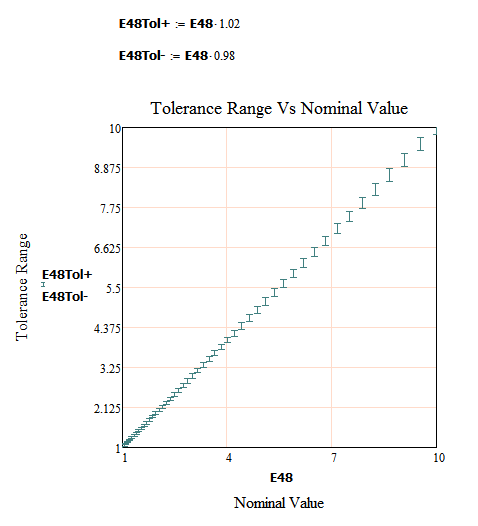 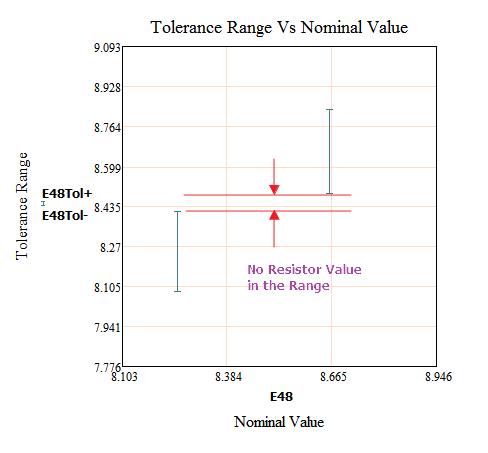 Figure 5: Illustration of Gaps in the E48.

Again, this is not a big deal because we can work around this issue. However, I was just surprised to learn this after all these years.

The easiest workaround is just to use a resistance series with a finer resolution. In my case here, I wanted to use the E96 series. I could also have used the E192 series, which would have solved the problem.  I should mention that some folks use multiple resistors to "tweak" a value. Here are some example circuits (Figure 6) from W. Stephen Woodward. I have put out a blog post on how to select the correct standard resistor values to bring you with 0.1% of any resistor value between 10 Ω and 1 MΩ. 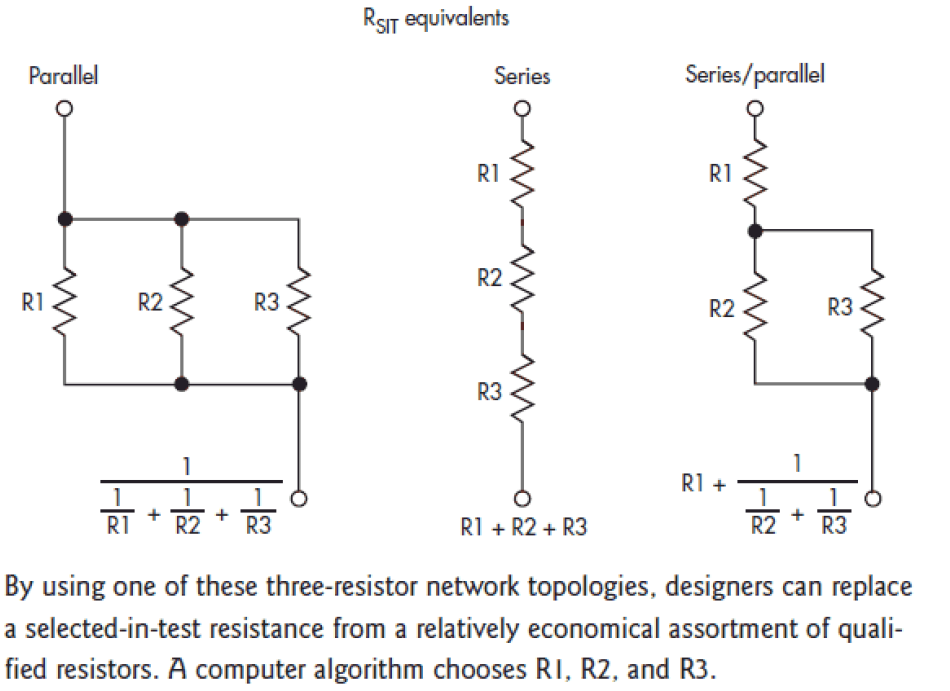 The Renard numbers and their E-series variants are used for all sorts of components, including capacitors, inductors, and Zener diodes. This exercise was useful because it showed me that there is stuff to learn even in something that I have been using for years.

Figure 7 shows the differences (marked with red ovals) between the E6, E12, and E24 values and the associated geometric series. 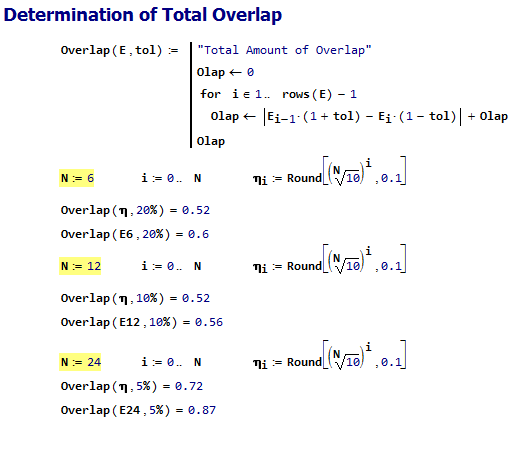 In Figure 9, I show that among the series values for E48, E96, E192, there is only one discrepancy between the standard values and the associated geometric series (9.19 vs 9.20). 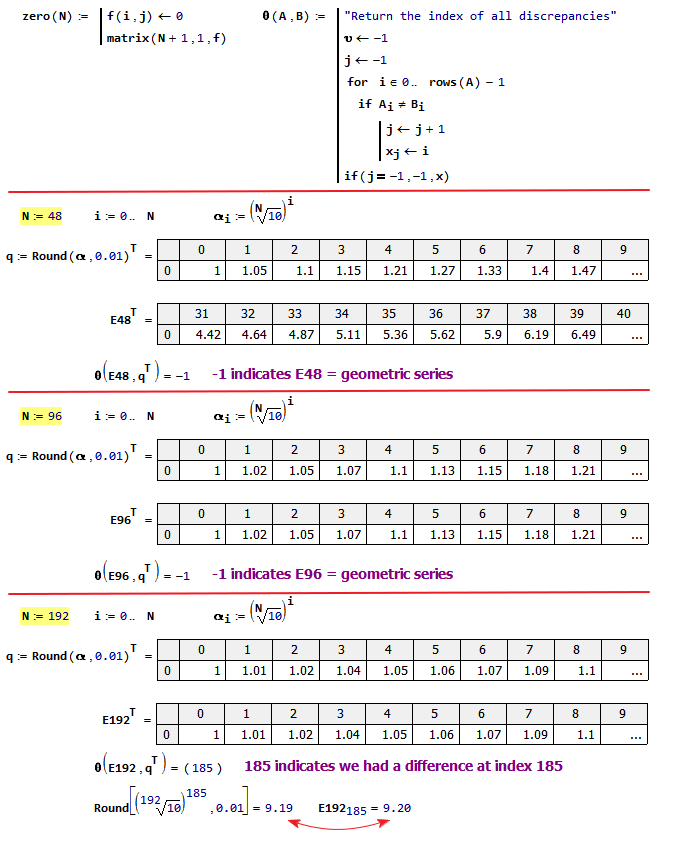 Figure 9: One Discrepancy Between E48, E96, E192 and the Associated Geometric Series.