Posted on 20-December-2016 by mathscinotes

You know everybody is ignorant, only on different subjects. 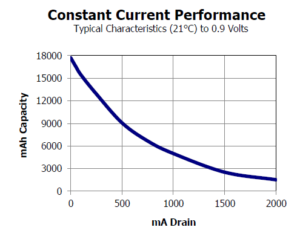 I was in a meeting this morning when I was told a battery pack had insufficient capacity to meet a 24 hour backup time requirement. While in the meeting, I grabbed a specification for the battery the test engineer was using, did a quick calculation of the backup time results that the test engineer should have expected, and what needed to change in order to pass the backup time requirement. While I have discussed different kinds of battery calculations in numerous blog posts, I thought this one was more typical than most and reflects the kind of work done daily by battery engineers.

You can see from Figure 1 that the amount of energy that you can extract from a D-cell alkaline battery is a strong function of the load current (aka drain current). The reason that the test failed is because the test engineer failed to use the correct load current, but I did not know that when I was informed that we failed the test – you never get the full story right away.

Figure 2 shows how I captured the information in Figure 1 using Dagra, a program that allows you to digitize curves. I also created a function, E(x) where x is the load current, for interpolating Dagra's discrete data capture.

Predict the Run Time Under the Test Conditions

The test engineer used a load current of 1.6 A, which is much higher than the backup current required for our products. I first wanted to verify that the backup time he measured was reasonable consider he used this load current. I can compute E(1.6 A), which is the available energy capacity of the battery in Amp-hours. You can estimate the run time by dividing the available energy capacity by the load current, which says we should be seeing ~1.5 hours. Since the test engineer is measuring 1.5 hours, everything is working as it should be – the test engineer's expectations were incorrect. 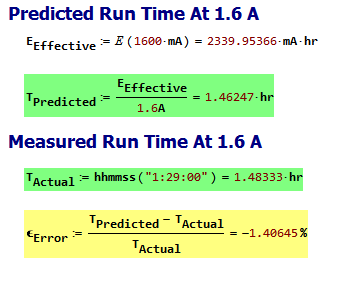 What happened here? The 1.6 A load current reflects normal product operation. When operating from battery, our products limit their power usage by turning off non-critical services, like wireless, that use much power.

I am confident that the unit will pass the 24 hour backup time requirement with a load current of ~400 mA.

All this happened during a 30 minute call in which backup time and many other subject were covered. All you need is a portable computer, an internet connection, and the right tools to work many problems quickly.

This entry was posted in Batteries. Bookmark the permalink.