US Farmland % By State

Posted on 2-August-2017 by mathscinotes

Write a thousand words a day and in three years you’ll be a writer! 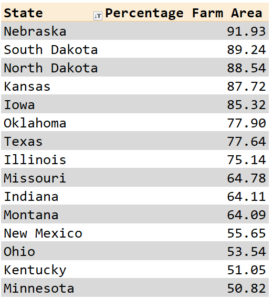 I am preparing to drive out to Idaho to experience totality during the August 21, 2017 eclipse. I am choosing to view the eclipse from Idaho because my granddaughter (and her parents) live in western Montana, and I can stop there for visit when I return to Minnesota. This will be a long drive through large states (Minnesota, North Dakota, Montana) that have a significant percentage of farm land. While planning my journey, I became curious as to the farmland percentage in each of the fifty states. In this post, I compute the farm land percentage by taking the farm acreage in each state and dividing by the state's land area (water area removed).

Figure 1 shows the top fifteen states by farm land percentage based on data from the US Department of Agriculture (USDA). You can see the farmland percentage for all fifty states by opening the Excel workbook linked here. The data was processed in Excel using Get and Transform (also known as Power Query).

It does not surprise me at all that North Dakota is over 88% farm land, Montana is 64% farmland and Minnesota is 50% farmland. The farms in each state are quite different: Montana will be dominated by cattle ranches, North Dakota by grain farms, and Minnesota by dairy farms.

The US Census department also breaks down the country into geographic regions called divisions, which are defined in the following list:

Figure 2 shows the agricultural percentage by geographic division. The Pacific division has such a low farmland percentage because Alaska only farms 0.23%  of its massive land area. 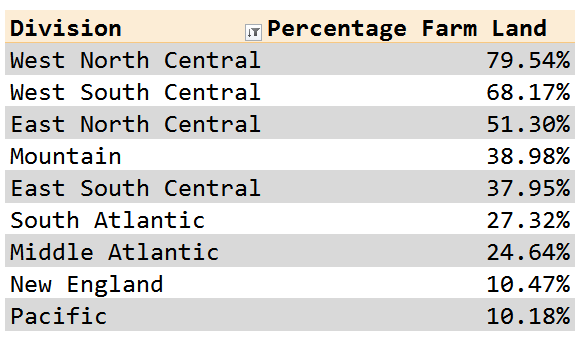 This entry was posted in Excel. Bookmark the permalink.

5 Responses to US Farmland % By State