Find out who you are and do it on purpose. 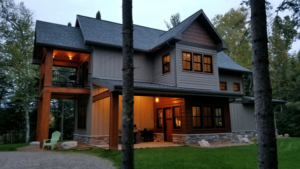 A number of people have asked questions about the process we used to design and build our cabin in northern Minnesota (Figure 1), a build that I have discussed in other posts (link, link). The questions center on the tools we used, what the build process was like, and things to watch for. The following post examines our design and build process from the standpoint of what went well and not so well.

Overall, I was very happy with how things turned out. We have been in the house now for 3 years and have had no major issues. The minor issues were mainly simple screw pops in the drywall and some drywall seams that separated. We also had some outlets that were in the wrong places and I had to move them. Normally, we would have caught the outlet position issues during construction, but we were not on-site often enough.

While things went well, I don't think we would build another custom home. It was too much work – one was enough.

We had some basic requirements on the structure:

My wife spent years collecting pictures of homes that she thought would fit our north woods lifestyle. She put together a collection of ~100 home designs that had features that she liked, for instance, lighting ideas like wall lights or pendant lights, carpet colors, what wood the furniture would be, how the kitchen would be set out, everything under the sun she had already gathered ideas for. Eventually, she found a plan for a boathouse that became her inspiration for the overall look of the house.

Designing this house was a lifetime dream for my wife and she started by drawing some simple hand drawings (she is a skilled hand draftsman). However, she had a large number of alternatives she wanted to evaluate, and hand drawing proved to be just too slow. 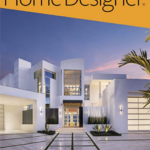 To speed her ability to try different options, we decided to move her from hand drawing to a 3D modeling program. This worked really well. For house design, we ended up choosing Home Designer by Chief Architect (Figure 2). It was easy to use, had excellent Youtube training videos, and had an excellent library of house components directly from the manufacturers (e.g. windows) that provided realistic renderings of her house concepts. I think we spent ~$300. I captured the initial draft of the house based on the original boathouse concept. My wife then did everything else.

One thing that we did miss during the design phase was allocating enough space for storing snow while snowplowing. While this issue is not directly about the house, it has become a big issue because the snow plower has to push snow up on the lawn. The plowed snow contains rock and other debris from our driveway, which is then deposited on our lawn every spring when the piles of snow melt. He also damages the lawn during the plowing operating. We are getting ready to buy a large snowblower that we can blow the snow over the whole yard and spread out the problem, but it would have been simpler to have clear areas for the snowplow to push the snow into.

Our location deep in the woods limited our builder options. We were fortunate to find Mark Utecht, a builder from the Twin Cities (Minneapolis/St. Paul) who had decided to move to the north woods. He had extensive experience building custom homes similar to ours and we liked his commitment to quality. 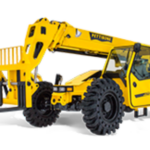 I worked on construction sites as a drywall installer during high school and I saw quite a few carpenters. Utecht may be the best hammer and nail man I have ever seen. While he contracted out the electrical, HVAC/plumbing, concrete, and roofing tasks, he did everything else himself. He was interesting to watch because he was a master of working alone and was a magician with a Pettibone (Figure 3). Every motion was well-practiced and efficient. I love to watch a master in action. When it comes to work that needs doing like plumbing, it's usually best to go for experts in that particular field to do that job as there's too much to mess up and that could go wrong were you to do it yourself. This is why reaching out to the likes of Apollo Plumbing is a popular decision when working on construction and remodeling projects.

To simplify getting cost estimates, Utecht requested that we take our plans to a draftsman who would check what Chief Architect generated for code compliance, generate drawings in a format that Utecht was used to, and creating a part database for cost estimation. This cost $1500 and I think was worth it as we began to iterate on costs.

Like most custom home builds, the initial cost estimates were far over our budget. Utecht was experienced at getting the most value for the dollar and he worked with my wife and the draftsman to hit our cost targets. This activity took a couple of months.

Building the structure took about six months. Overall, there was relatively little drama during the construction. However, there were some miscommunications that normally would be easy to deal with if my wife could have been on-site every day. However, we live 200 miles from the construction site and daily inspections were out of the question. Also, there is no cellular service nor Internet at the site.

Fortunately, I was able to get a DSL line to the site and I set up cameras for remote monitoring. This helped and we were able to correct some errors from long-distance, but remote monitoring was not adequate. Some painful rework ended up being needed.

Table 1 shows a score that represents my feeling about the build and how it went.

This entry was posted in Cabin, Construction. Bookmark the permalink.