Posted on 12-February-2013 by mathscinotes

Madam, if you were my wife, I'd drink it!

- Winston Churchill's response to Lady Astor, who had said to him "If you were my husband, I'd poison your tea." Churchill and Lady Astor were famous for their feuding.

Figure 1: Aftermath of a Hydrogen Gas Explosion in a Battery Vault.

I recently have received a number of questions about the outgassing of hydrogen gas that can occur from lead-acid batteries when they are being overcharged. I thought it would be useful to review what is happening when a battery is outgassing. When being charged, batteries can release enough hydrogen gas to create an explosive hazard. Consider this report and Figure 1 as an example as to what can happen. With lead-acid batteries, hydrogen gas can be generated at any time, but charging is when the greatest challenges are faced. You may also check this out to learn more about hydrogen gas detection.

When you think about it, a lead-acid battery being charged looks a lot like a water electrolysis setup. You can split water into its hydrogen and oxygen components by applying an electrical potential greater than 1.48 V to water. Figure 2 shows a typical electrolysis setup (source).

Figure 2: Example of an Electrolysis Setup.

Figure 2 also describes a battery being charged -- there are two terminals that are separated by water (plus some H2SO4) and the terminals have a voltage applied to them. Figure 3 shows a cross-section diagram of a lead-acid battery. Figures 2 and 3 are very similar.

Oxygen is generated at the positive terminal and hydrogen is generated at the negative terminal. Since we normally charge lead-acid batteries at a potential higher than 2.2 V, we always get some electrolysis along with the charging. That is why some batteries need to have their water replenished frequently. Those that do not need to have their water replenished incorporate some mechanism for gas recombination (see AGM and Gel Battery).

How to Abuse a Lead Acid Battery

There actually are standards for how to abuse a battery (i.e. force it to runaway and outgas). The one I am most familiar with is the Induced Destructive Overcharge Test in IEC standard 952-1:1988. Here is a useful reference that discusses how to perform the test.

It does not take much searching on the web to find examples of a lead acid battery that has undergone thermal runaway. Figure 4 shows an example of battery damage as the result of thermal runaway. I have seen some cases where the battery case got so hot that it melted.

Figure 4: Example of an Battery That Has Exploded (Wikipedia).

Remember that overcharging, outgassing, and thermal runaway are all related. Thermal runaway is not a good thing to have to happen.

The discussion that follows is about the Panasonic LC-127R2P 12V/7.2Ah, which is a very commonly used sealed lead-acid battery. I show this battery in Figure 5. This battery is composed of 6 cells connected in series. Each cell nominally generates 2.0 V, but the exact voltage varies with the batteries state of charge and can be anywhere from 1.75 V to 2.25 V when discharging. As this battery is filled with Sulfuric acid, this is a dangerous chemical for anyone to deal with, especially if it is released into the atmosphere. With this being said, it may be worth checking out a site like Storemasta, in the hopes of finding out more about chemical like Sulfuric acid.

Figure 5: Sealed Lead Acid Battery Example. This is an AGM (Absorbed or Advanced Glass Mat) battery. The mat is sandwiched between the plates and is saturated with sulfuric acid. The mat retains the acid in the event of a breakage, making the battery spill-proof. You can also get AGM Solar Batteries.

It really is a workhorse product -- I have never had any issue with it. Like all lead-acid batteries, you just need to treat it nicely.

I thought it would be a good exercise to show how much hydrogen and oxygen a battery can generate. Note that most references focus on the generation of hydrogen because that is the gas that is flammable. IEEE 484 is the standard governing the installation practices for lead-acid batteries and it states that

... Maximum hydrogen evolution rate is 0.127 mL/s per charging ampere per cell at 25 °C and standard pressure (760 mmHg). The worst-case condition exists when forcing maximum current into a fully charged battery. ...

The hydrogen evolution rate is important to know because the Lower Explosive Limit (LEL) concentration for H2 gas is 4%. Knowing the rate of hydrogen gas generation and the volume of the battery enclosure allows us to determine the amount of ventilation required for an explosion-proof installation. We can show where this result comes from applying a bit of basic chemistry. Figure 6 shows my derivation. In this derivation, I show how to compute the H2, O2, and total gas (H2 and O2) generation rates per cell.

Figure 6: Derivation of IEEE 484 Value for H2 Gas Generation Per Amp of Current. A Total Gas Volume Value is Also Generated For Comparison with Panasonic Data in Figure 7.

Using the derivation of Figure 6, Equation 2 states the complete equation for the total gas generation rate (O2 and H2) from a battery composed of multiple cells.

While Equation 2 is stated for the total gas generation rate, the same basic equation form holds for O2 and H2 individually, just change the constant term from 11.4 mL/(min ·A ·cell) to:

Figure 7 shows the outgassing graph for the Panasonic LC-127R2P 12V/7.2Ah Sealed Lead Acid Battery. This graph shows the total amount of gas generated, which means both O2 and H2. You can see from the handwriting on the graph that this is not an official graph -- I got this from an electrochemist with Panasonic who had measured the outgassing characteristic. The little black arrows on the graph indicate which axis the individual curve corresponds to. The x-axis is stated in units of "CA". CA describes the charging current as a fraction of the A-hr capacity of the battery (the A-hr capacity is treated as a current value). Using the 7.2 A-hr battery for an example, 0.1 CA = 0.1 ·7.2 A = 0.72 A charging current.

Figure 7 deserves one other comment -- I have no idea why the battery vendor's electrochemist used a logarithmic x-axis. Gas generation is linear with charging current. The use of a logarithmic axis makes it look like something nonlinear is going on. In the following discussion, I will take the data and re-plot it on a linear graph (Figure 8).

Figure 8 shows a comparison of the measured gas generation rate versus the predicted gas generation rate. Notice that the theoretical rate is higher than the measured rate. This is because 100% of the charging current into the battery does not go into electrolysis -- some must go into charging. To recover the water lost because of electrolysis, sealed lead acid batteries contain one of two types of gas recombining technology which will ensure that low levels of generated gas will be recombined into water. However, the theoretical rate is useful because it established an upper bound for the amount of H2 that can be generated. 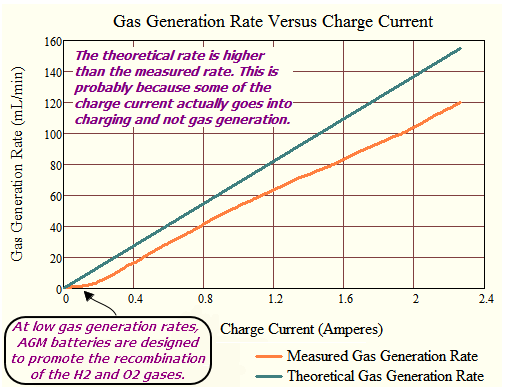 Lead-acid battery outgassing is one of the least understood characteristics of this chemistry. Hopefully this note helps explain how outgassing works and how to estimate the amount of hydrogen generated.

This entry was posted in Batteries, Electronics. Bookmark the permalink.