Distance to the Horizon Assuming Refraction

Posted on 19-August-2013 by mathscinotes

Fate rarely calls upon us at a moment of our choosing.

— Optimus Prime. This quote shows that inspiration can come from anywhere.

Figure 1: Illustration Showing that Refraction Increases the Perceived Distance to the Horizon.

While doing some reading on lighthouses, I needed a formula to compute the distance to the horizon as a function of height. This formula would give me an idea of how far away a lighthouse could be seen.

As I usually do, I started with the Wikipedia and it listed two interesting equations:

Allowing for refraction means that light will curve around the geometrical horizon (Eq. 2),  which means that we will see objects that are just beyond the horizon. Using Eq. 2, we will compute a horizon distance that is about 7% further than predicted by Eq. 1. Figure 1 illustrates this point.

The material presented in this blog is similar to that presented on mirages. I have included some mirage information in Appendix B.

Light bends because of density differences in the atmosphere. These density differences are caused by (1) altitude and (2) temperature. Of course, temperature and pressure vary with time. To get some idea of the effect of refraction on the distance to the horizon, we need to assume a "typical" atmosphere. We can derive Eq. 2 using the typical atmosphere assumption, but we need to understand that those conditions are often not present.

Here is my problem solving approach:

Air's Refractivity as a function of Density

, where n is the index of refraction. One common formula for the refractivity of dry air is given by Equation 3 (Source).

Using the ideal gas law, we can show that temperature and pressure are closely related to density as shown in Equation 4.

(R and MWAir are constants). This means we can restate Equation 3 in the simpler form shown in Equation 5.

For this post, I will assume that the wavelength of light is fixed and that

Deriving this expression requires manipulation of the ideal gas law. The derivation is straightforward but tedious. I have included it in Appendix A.

Equation 6 has a couple of interesting aspects:

We can compute the autoconvective lapse rate as shown in Figure 3. The value I obtain here can be confirmed at this web page.

Radius of Curvature for the Refracted Light Beam 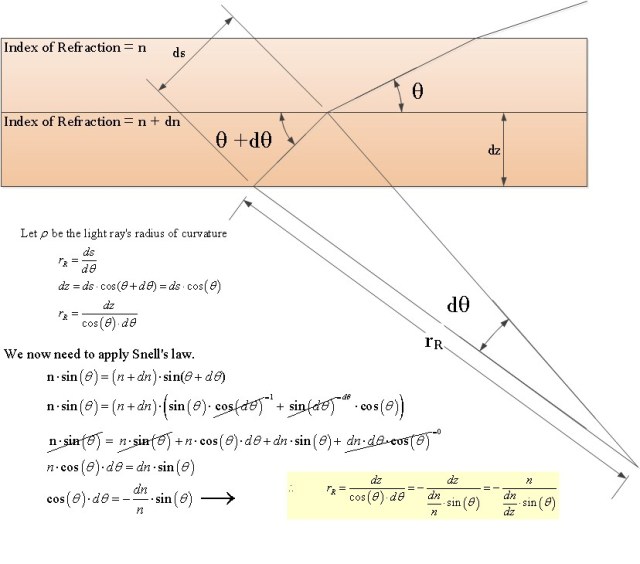 Figure 4: Derivation of the Radius of Curvature Expression.

In the case of a lighthouse beam,

. This means we can write the refraction radius as

We are going to model the refracted light beam as moving along the arc of a circle of radius larger than that of the Earth. Figure 5 illustrates this situation.

Figure 5: Illustration of the Refracted Light Beam Moving Along the Arc of a Circle.

Figure 6: Derivation of Formula for the Distance Traveled Along the Earth's Surface By Refracted Light Beam.

Equation 7 shows the key result from the derivation in Figure 6.

Notice how Eq.7 can be viewed as Eq. 1 with an enlarged Earth radius of

. I see refraction often modeled by engineers who simply use Eq. 1 with an enlarged Earth radius. The radius used depends on the wavelength of the photons under consideration.

Figure 7 shows how I obtained Equation 2 from Equation 7.

While the derivation was a bit long, I was able to derive Equation 2 from first principles. The derivation shows that the final result is sensitive to the choice of lapse rate, which varies throughout the day. I should note that the use of a refraction radius that is a multiple of the Earth's radius is often applied to other types of electromagnetic signals. For example, radar systems frequently use a "4/3 Earth radius" for refraction problems (Source). The refraction radius for radar is different than for optical signals because the index of refraction in the radio band is different from that of optical signals.

Appendix A: Derivation of Rate of Change of Atmospheric Index of Refraction with Lapse Rate.

Figure A: Derivation of Rate of Change of Atmospheric Index of Refraction with Lapse Rate.

Appendix B: Excellent Discussion of Index of Refraction, Lapse Rate, and Mirages.

I really like the way this author discusses mirages (Source). 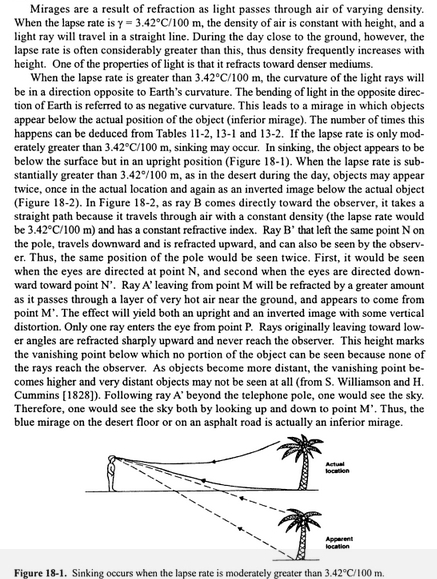 Figure B: Excellent Description on the Formation of Mirages.

This entry was posted in General Science, Navigation, optics. Bookmark the permalink.

24 Responses to Distance to the Horizon Assuming Refraction