The Farthest Mountaintops from the Center of the Earth

Posted on 2-January-2015 by mathscinotes

Present to inform, not to impress; if you inform, you will impress. 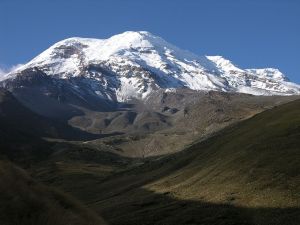 I have a boring task that requires that I be able to access a geographic database to gather a large amount of information. There are numerous databases out there, but the Wikipedia Geonames database is the one I would really like to learn how to use – it is large and free. I am not particularly skilled at web scraping and I have been procrastinating on my task for a while. I need a interesting problem to drive my interest.

Yesterday, I was reading about Mt. Everest on the Wikipedia when I saw the following statement that aroused my curiosity about the shape of the Earth.

Mount Chimborazo is shown in Figure 1. While I have never heard of this mountain before, it apparently has the distinction of having a summit that is as far from the center of the Earth as a point on land gets.

I can see a little math here and now I start to stir. What if I constructed a list of the mountain peaks furthest from the center of the Earth? That would give me a problem that I am interested in that would also allow me to learn how to use the Geonames database.

My goal is generate a table of mountain heights sorted from by distance from the center of the Earth. While accomplishing my goal, I will also:

All of my work today will be done in Excel and I will provide a link to my spreadsheet at the end of this post. There will be a small Visual Basic for Applications (VBA) program used with Excel to access the data.

A big part of this effort is getting all the terms defined. Here are the definitions that I used.

Reference Ellipsoid
In geodesy, a reference ellipsoid is a mathematically defined surface that approximates the geoid, the truer figure of the Earth, or other planetary body. Because of their relative simplicity, reference ellipsoids are used as a preferred surface on which geodetic network computations are performed and point coordinates such as latitude, longitude, and elevation are defined (source).
Ellipsoid Height
The height of an object above the reference ellipsoid in use. This term is generally used to qualify an elevation as being measured from the ellipsoid as opposed to the geoid. GPS systems calculate ellipsoidal height (source).
Geoid
Earth's geoid is a calculated surface of equal gravitational potential energy and represents the shape the sea surface would be if the ocean were not in motion (source).
Mean Sea Level
Sea level is generally used to refer to Mean Sea Level (MSL), an average level for the surface of one or more of Earth's oceans from which heights such as elevations may be measured. MSL is a type of vertical datum – a standardized geodetic reference point – that is used, for example, as a chart datum in cartography and marine navigation, or, in aviation, as the standard sea level at which atmospheric pressure is measured in order to calibrate altitude and, consequently, aircraft flight levels (source).
Ocean Surface Topography
Measurement of the sea surface height relative to Earth's geoid. The height variations of ocean surface topography can be as much as two meters and are influenced by ocean circulation, ocean temperature, and salinity (source). I will not be concerned with these variations in this post.
Orthometric Height
The orthometric height of a point is the distance H along a plumb line from a point to the geoid. Orthometric height is for all practical purposes "height above sea level"(source).

Here is the information that I need to gather:

The following list details my process for solving this problem:

I have written an Excel workbook that will obtain the latitude and longitude for the mountain names in my list of highest peaks. The workbook contains a VBA routine that will:

About 10% of the mountains do not have an entry in the Geonames database. There are various reasons for this:

The Geonames database requires that you have a user name. There is a cell in the workbook for your username. I have removed mine.

Now that I have the latitudes and longitudes of the mountain summits, I can run a free tool, called intptdac.exe,  to generate the geoid corrections. The program could not be any simpler to run:

Calculation of the Distance from the Center of the Earth

I have used Equation 1 that was beautifully derived on this web site to determine the distance from the center of the Earth.

Table 1 shows the 28 mountains with summits furthest from the Earth's center. The spreadsheet has a much larger list of 210 mountain summits.

I can confirm that the results for the first and last table entries (Chimborazo and Everest) agree with the Earth center distances given in the Wikipedia, which I quote below:

I was able to extract geographic information from the Geonames database and process that data to obtain a list of mountains furthest from the center of the Earth.

Here is the link to my workbook.

This entry was posted in General Science, Geology. Bookmark the permalink.