I've missed more than 9000 shots in my career. I've lost almost 300 games. 26 times, I've been trusted to take the game winning shot and missed. I've failed over and over and over again in my life. And that is why I succeed. 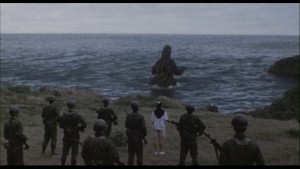 This is my final, planned post on Pejsa's ballistic model. I feel a little like Godzilla (Figure 1) marching back into the sea at the end of one of his many movies – it is time to move on to other subjects.

In the main body of this post, I work through a detailed example from "Modern Practical Ballistics" on how to apply Pejsa's formulas to determine a range table for a projectile moving through a wide range of velocities. In Appendix A, I work through a second example from the text as additional validation of my implementation. In Appendix B, I show how to use an Ordinary Differential Equation (ODE) solver to generate a range table for comparison with Pejsa's algebraic approximations.

While I have mentioned some of the following concepts before, a little review will not hurt.

Figure 1 illustrates the F curve used by Pejsa, which describes the deceleration of the reference projectile. 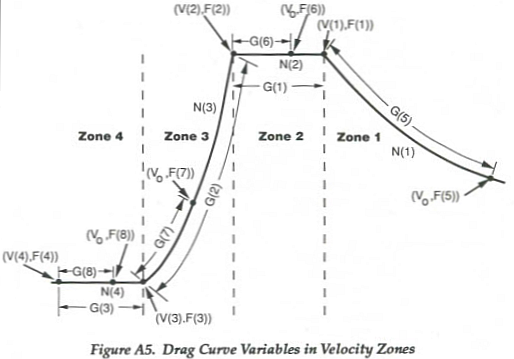 Before I get too far, I need to define a term that Pejsa called the "drop rate".

Drop Rate (DR)
The drop rate is the number of vertical inches a projectile drops per yard of horizontal travel.

Equation 1 is derived in Appendix C.

Pejsa's approach can be summarized as follows:

Pejsa includes a large table of ballistic solutions in the back of his book for various projectiles. I randomly chose an example with a muzzle velocity V0=2400 fps and a ballistic coefficient BC=0.4 to test my implementation of his equations.

Figure 3 shows how I determined the ranges at which the projectile crosses from velocity zone into another. Calculations begin with the F function, which represents the deceleration of the reference projectile (i.e. a 1-inch diameter, 1 lb, G7 shape) at various velocities. 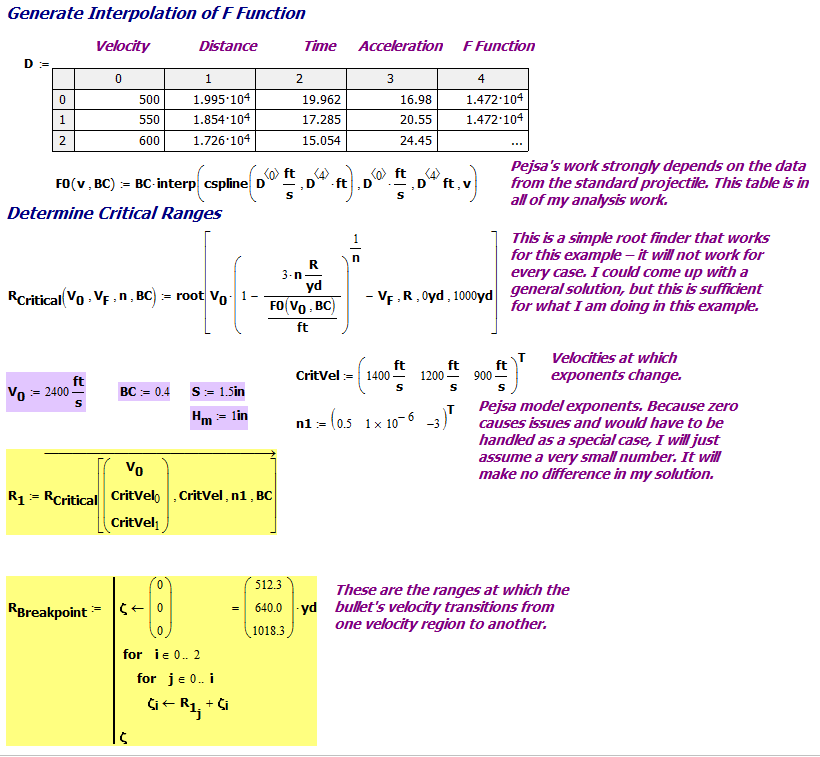 Now that I have computed the distances at which the projectile transitions from one velocity zone to another, I can compute the various drops that occur as a function of the ranges within each zone. Figure 4 summarizes these calculations. Observe that I compute the drop rate (y-direction) accrued by the end of velocity zones 1, 2, and 3. I sum all the drop contributions to the projectile in the function DR. 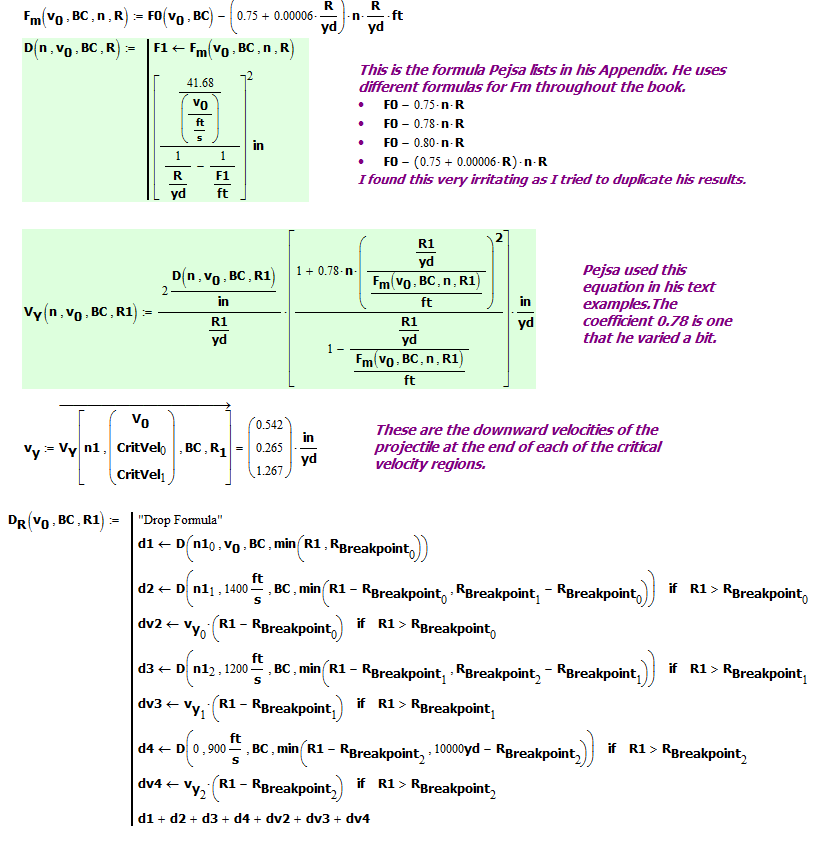 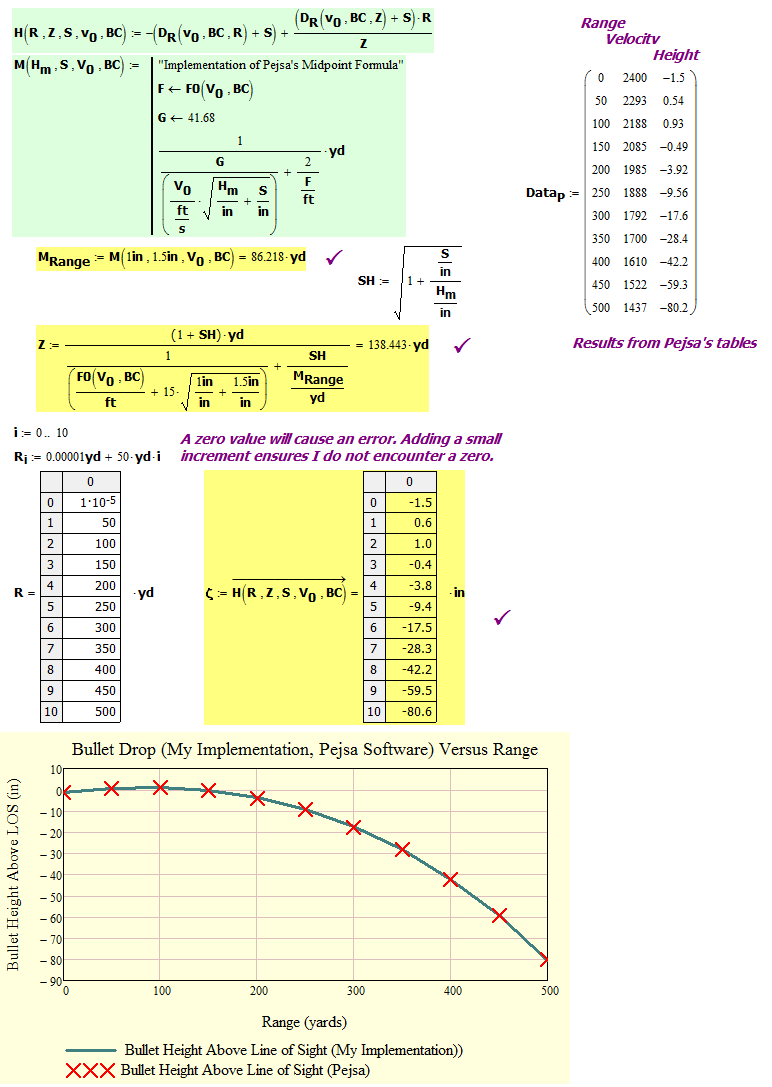 This concludes my planned review of Pejsa's "Modern Practical Ballistics". I have presented detailed derivations of his key results and provided examples of their application using Mathcad. Hopefully, the material presented here will be useful to those battling through Pejsa's book – it was one of the most frustrating reads I have encountered. I believe that I mastered the material, but that was in spite of the book's presentation.

I have tried my routine on multiple examples from Pejsa's book. On page 94, Pejsa works an example and presents the results in Figure 13 of his text. I have used my implementation of his equations to duplicate his results in this example file (Figure 6). This file is a PDF of the same Mathcad routine used to generate the results in the main body of this post. 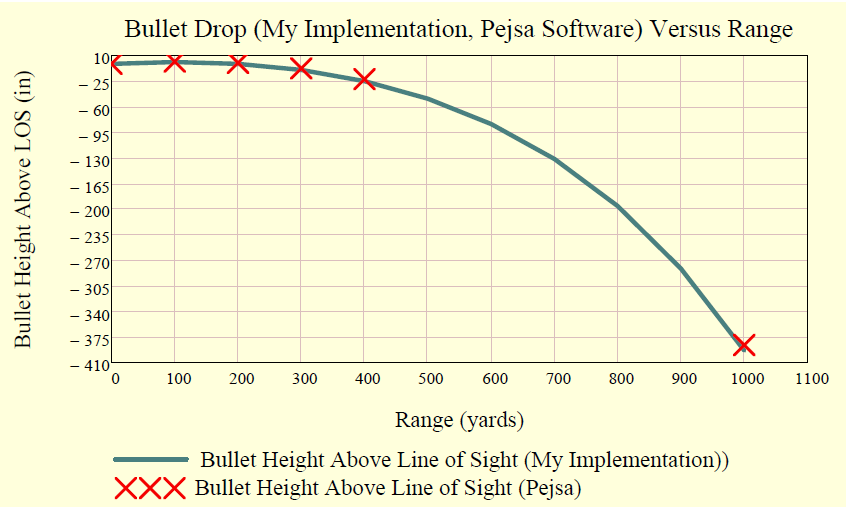 Figure 6: My Results and Comparison with Chapter Example. 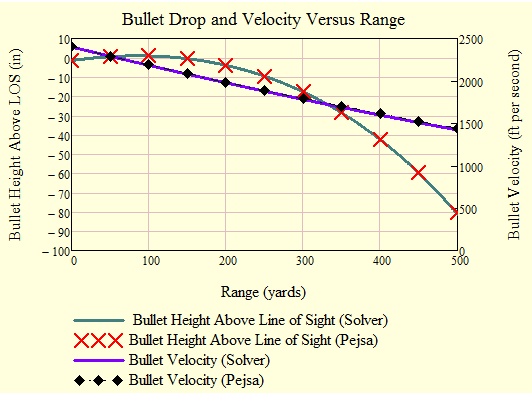 I have attached a PDF of my worksheet Blog_ODE.

Figure 8 shows my derivation of the drop rate equation (Equation 1). 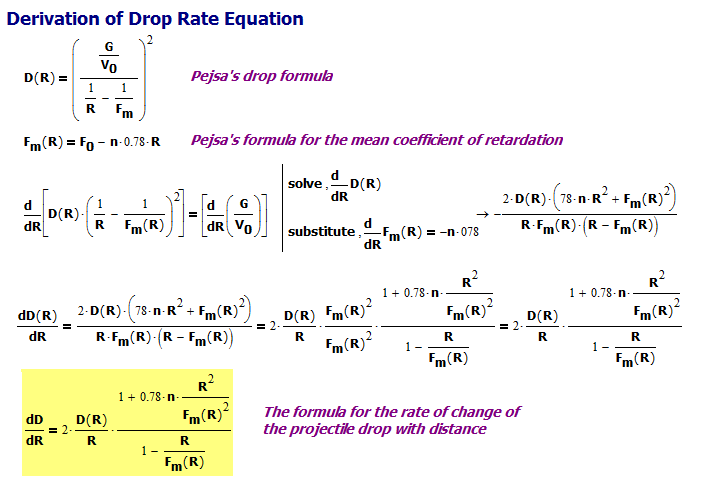 This entry was posted in Ballistics. Bookmark the permalink.