Posted on 9-February-2016 by mathscinotes

If I had to give credit to the instruments and machines that won us the war in the Pacific, I would rate them in this order: submarines first, radar second, planes third, bulldozers fourth.

— Admiral Bull Halsey. I have always found the performance of US submarines during WW2 amazing considering the challenges that they faced with faulty torpedoes. 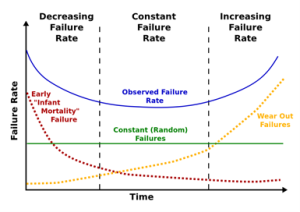 One of the more distasteful tasks I need to do is make estimates of annual product failure rates using  MTBF predictions based on part count methods. I find this task distasteful because I have never seen any indication that MTBF predictions are correlated in any way with field failure rates. This is not solely my observation – the US Army has cancelled its use of part count method MTBF predictions (i.e.  based on MIL-HDBK-217). However, the telecommunications industry has continued to use these predictions through their use of Telcordia SR-332, which is similar to MIL-HDBK-217. If you want a simple example of an SR-332-based reliability prediction, see this very clear example from Avago. The parts count method assumes that components fail at a constant rate (green line in Figure 1).

While this calculation is simple, it is useful to discuss why the results generated are so useless – in fact, I would argue that they drive incorrect business decisions for things like required spare parts inventories.

The basic math here is shown in Equation 1.

The shortcomings of the part count method are many:

Figure 2 shows my calculations for a made-up example.

In general, I find all formal procedures distasteful. In this case, people want a calculation done in a specific manner – and I dutifully comply. However, I know the answer does not reflect reality. In general, these computed annualized failure rates are ~10x what I would consider acceptable annual failure rates for actual products.

I recently had a conversation with an Australian service provider who was having trouble predicting the number of spare parts he needed to have in inventory. The problem he was having traced directly back to this calculation.

This entry was posted in Statistics. Bookmark the permalink.