Remote Car Starter Can Drain Car Battery Within a Week

Posted on 28-November-2016 by mathscinotes

If a free society cannot help the many who are poor, it cannot save the few who are rich. 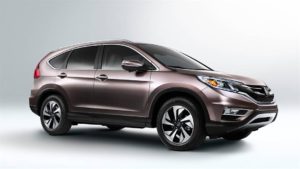 My Montana-based son mentioned that his wife's 2016 Honda CR-V (Figure 1) will not turn-over after sitting in the garage for five days. To be honest, there was a part of me that wasn't surprised in the slightest that the car wouldn't start. What do you expect to happen when it has been at a standstill for five days? The other side of me, though, thought that something more serious had to have been going on if something like this had happened in such a short amount of time. I'm just thankful that it was this problem we had to deal with and not something more severe. Imagine if she had found herself in a car accident because of underlying problems? It would be unthinkable, but I guess we should be lucky that my son's wife had taken the time to read something like this safeco insurance review when it came to renewing her insurance policy, so at least she would be covered if something else were to happen. Of course, the fact that it wouldn't turn-over is worrying in itself.

No starting problems had occurred prior to early November. Unfortunately, I have had my share of car electrical problems and some of these problems have been hard to find. However, this is a new car and under warranty, so I recommended that he just take it into the dealer. He took the car into the Honda dealer, who told him that this is the result of the current discharge imposed on his car battery by his aftermarket remote start system (with cell phone interface, sometimes called a drone), which was verified to be within specification –the car was operating normally.

In this post, I will discuss why this behavior is normal considering how the remote starter works and recent weather changes in Montana. I should mention that all modern cars will discharge their batteries over time because their computer systems are always on – their nominal current drain is about 30 mA. Even without a remote starter, the cars will discharge their batteries after about 3 weeks (Appendix A).

Cold Cranking Amps (CCA)
Cold cranking amperes (CCA) is the amount of current a battery can provide at 0 F (−18 C). (Source)
Parasitic Current Drain (iP)
Parasitic current drain can be defined as any electrical device that draws electric current when the ignition key is turned off. In the case of a remote starter, the radio receiver must be powered so that it can receive the starter signal. This receiver current draw is parasitic current drain. (Source)
Ampere-Hour (Ah) Capacity
An ampere hour or amp hour is a unit of electric charge, having dimensions of electric current times time, equal to the charge transferred by a steady current of one ampere flowing for one hour, or 3600 coulombs. Battery charge capacity is usually rated in Ah. (Source)

Figure 2 shows the impact of temperature on the capacity of a lead-acid traction battery. 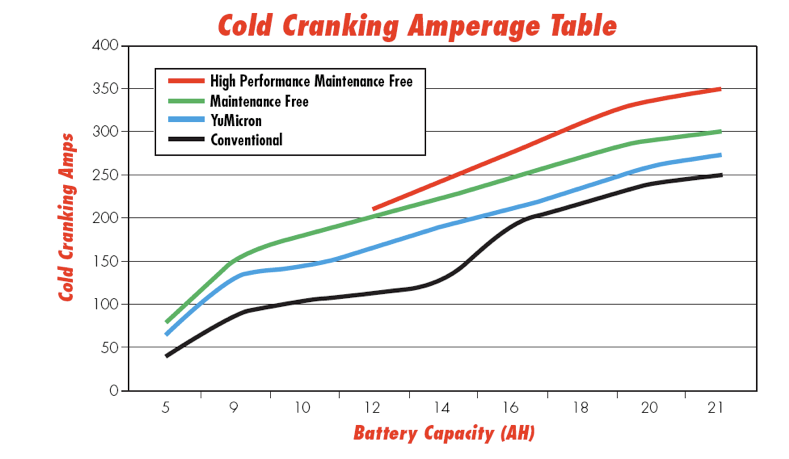 Cranking Current Required By a Car Versus Temperature

Figure 4 shows that the battery's available CCA decreases with lower temperature as the car's need for cranking amperage increases. I refer to this situation as "bad squared". 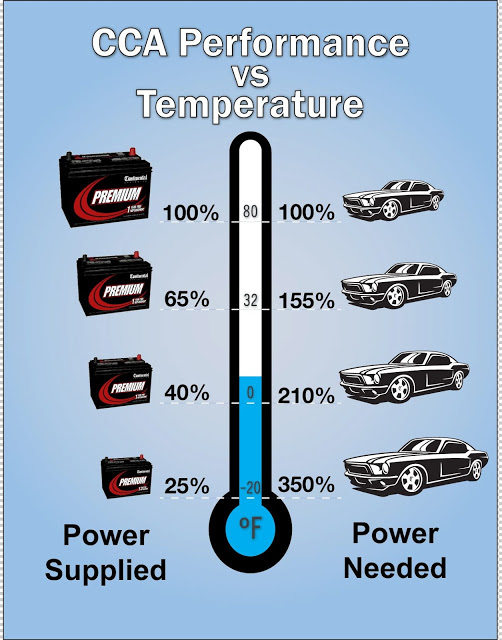 Here is what I was able to find out about my son's situation:

This is enough information for me to figure out what is going on.

Figure 5 shows my analysis of the battery capacity. What I calculated is that the battery's capacity has reduced by ~75%. This results in a large decrease in the cranking amps available (justification in a later post) and results in slow or no cranking when attempting to start the car. 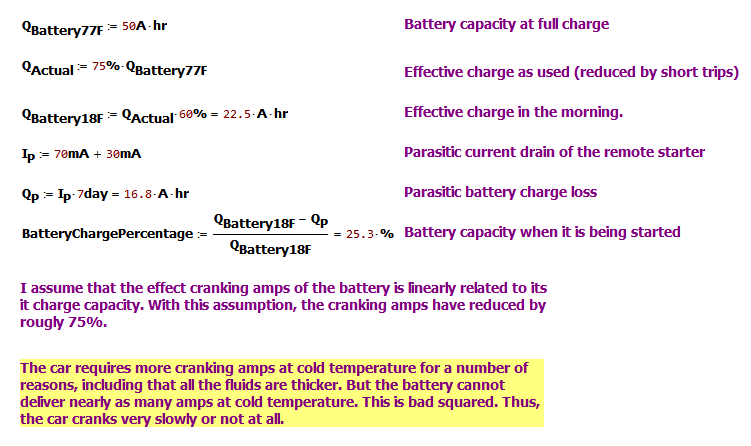 I am afraid that an additional parasitic battery load of 70 mA is enough to drain the battery sufficiently after five days to make starting difficult or impossible. This reminds me of a battery problem I had in my youth where a glove compartment light did not turn off and would slowly drain my battery. I could fix the light problem, but the remote starter must draw current to detect the radio start signal.

Figure 6 shows a manual excerpt that illustrates how modern cars have computers that constantly drain charge from their batteries.

This entry was posted in Batteries. Bookmark the permalink.