A faith that makes losing a sin will make cheating a sacrament. 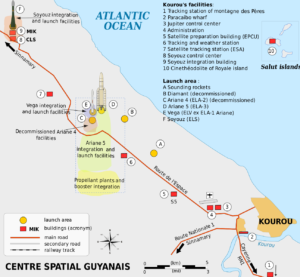 Putting a satellite into orbit requires that you impart a velocity of ~17,000 mph to the satellite. Because the Earth is rotating, its surface velocity gives you a head start on achieving orbital velocity when you launch toward the east – the direction of the Earth's rotation. The closer you move your launch site to the equator, the more velocity you get from the Earth's rotation.

I became interested in the important of launch site location after reading this article. My results agree with theirs.

Equation 2 shows how to compute using Mathcad 15 the Earth's radius as a function of latitude based on the WGS84 reference model. The exact formula I used is from this paper.

The latitude of the launch sites is what determines its velocity boost. I list their latitudes here:

I should mention that the Cape Canaveral launch site consists of numerous launch pads. Figure 2 shows a map. 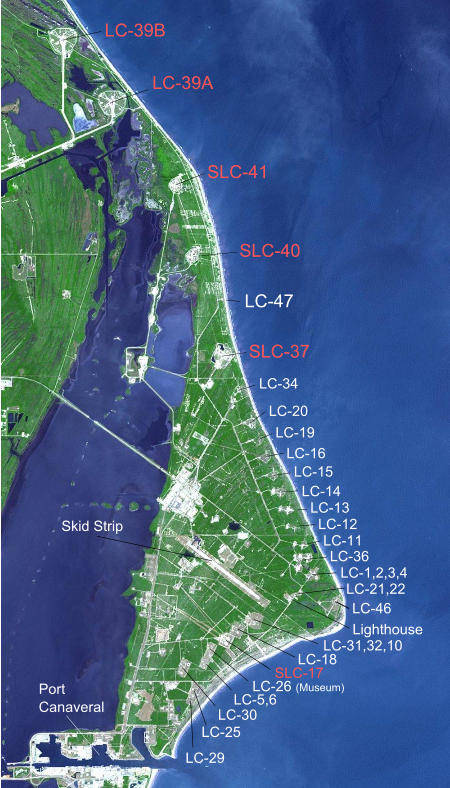 I want to compute the difference in the Earth's rotational velocity at the the two launch sites. Figure 3 shows how to perform that calculation. 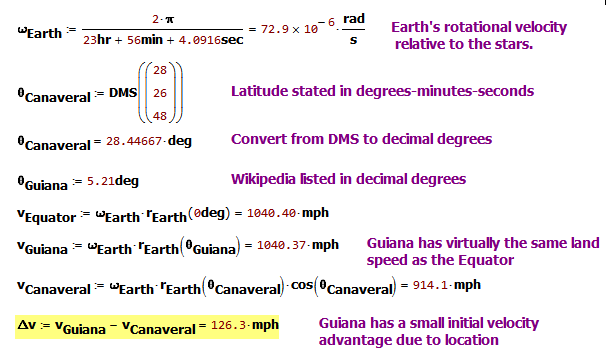 My analysis shows that the Guiana launch site has a velocity advantage of 126 mph, which is relatively small compared to the 17,000 mph needed to achieve orbit.

I was able to confirm the velocity advantage for the Guiana launch site over that of Cape Canaveral. The ideal launch site would be as near as possible to the equator with nothing but ocean to the east to ensure that failed rockets would drop into the ocean. Polar launches have different requirements – like clear ocean to the north. The US uses Vandenberg Air Force Base for those launches.