To the modern American at the millennium, these carrier pilots of more than a half century ago -- Massey, Waldron, and Lindsey last seen fighting to free themselves in a sea of flames as their planes were blasted apart by Zeros -- now appear as superhuman exemplars of what constituted heroism in the bleak months after the beginning of World War II. Even their names seem almost caricatures of an earlier stalwart American manhood -- Max Leslie, Lem Massey, Wade McClusky, Jack Waldron -- doomed fighters who were not all young eighteen-year-old conscripts, but often married and with children, enthusiastic rather than merely willing to fly their decrepit planes into a fiery end above the Japanese fleet, in a few seconds to orphan their families if need be to defend all that they held dear. One wonders if an America of suburban, video-playing Nicoles, Ashleys and Jasons shall ever see their like again.

— Victor Davis Hanson on the heroes of the Battle of Midway. Unlike Hanson, I would not be concerned about today's youth. I watched many young people from my neighborhood volunteer to fight in Iraq and Afghanistan. My main concern is ensuring that government does not waste their lives on ventures unworthy of their sacrifice. I should mention that Max Leslie and Wade McClusky did survive the Battle of Midway.

I have had a number of discussions with coworkers about the different types of wall insulation – some of these discussions have been documented in previous blog posts (e.g. here , here, here). There exists wide cost and performance disparities between the different wall insulation technologies. With respect to cost, I view fiberglass batts as a low-cost insulation option and the spray foams (open and closed cell) as high-cost options. All the options have their advantages and disadvantages. Fine Homebuilding Magazine (August/September 2017) has an excellent article by Martin Holladay provides an excellent spreadsheet-like analysis that illustrates the trade-offs between open and closed-cell foam nicely. My goal in this post is to go through the computational details of his analysis and to discuss his approach to choosing the best insulation for your application.

I like Martin's discussion because he focuses on the opportunity costs associated with the insulation choice. In Martin's analysis, he shows that the difference between open cell and closed cell R-values can be rather small relative to the cost differential – Martin mentions a $3K premium for closed cell over open cell to obtain a 1R - 2R improvement when insulating stud bays. Martin argues that you can get a better R-value return by spending that $3K on other insulation options, like adding exterior rigid foam – which I have used for some projects. The exact premium will vary depending on the house size, but I have encountered similar price differentials in my own work.

Most home insulation value is modeled using the resistor analogs, like I show in Figure 2. The model in Figure 2 is very simple, but useful in that it models two important types of heat transfer in traditional construction: 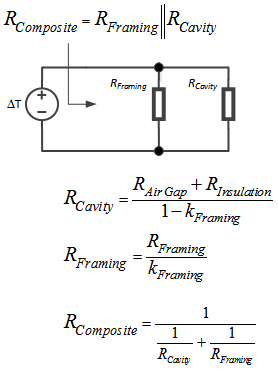 While the resistor values are calculated using the thermal conductivities of the materials involved, most manufacturers' specify the R-value per inch of their materials. I will use these numbers for this analysis.

Given the background information, the analysis is straightforward. I put everything into an Excel spreadsheet, which you can download here. The spreadsheet generates the table shown in Figure 1.

I always consider the return on my investment. Holladay entitled his article "Close-cell foam between studs is a waste," which really grabbed my attention. I have been reluctant to invest in closed cell because of its high installation cost relative to the insulation benefit it provides. It looks like an energy expert like Holladay also has concerns.

This entry was posted in Construction. Bookmark the permalink.