Posted on 16-February-2016 by mathscinotes

The only hope of a pure mathematician is to die before their work is applied.

— Pure mathematician stunned to hear that his work found an application in string theory. 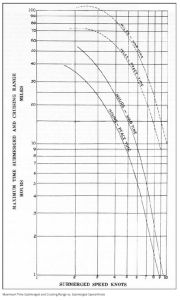 I have been reading the book The Bravest Man, a biography of the WW2 exploits of US Navy submarine commander Dick O'Kane. I have not formed an opinion on the book since I just started reading it, but the book does highlight the submerged maneuvering limitations imposed on a ww2 submarine because of its lead-acid battery-based power plant. The book's discussion made me curious about the operational characteristics of a Gato-class submarine when operating submerged on batteries.  In this post, I will be examining the Gato-class submarine's run time versus speed plot (Figure 1).

I should mention that O'Kane is most famous for his work as skipper of the USS Tang, a Balao-class submarine. I currently am reading about O'Kane's time serving as executive officer on the USS Wahoo under Mush Morton. I find their relationship uniquely effective – in part because Morton chose to  conn the submarine while O'Kane man the periscope.  It was an excellent example of teamwork and not letting ego get in the way of one's task.

This analysis is similar to that done on this previous blog post. Ultimately, I will use this model in a simple software tool I am creating to help me when playing my favorite submarine simulation, Silent Hunter.

I have examined submarine battery power for modern electric submarines on this blog before. I will apply a similar analysis to this class of WW2-era boats.

Figure 2 shows how I usually model submarine battery endurance. The only thing that is a bit unusual is my modeling of the inefficiency of drawing high currents from a battery. I chose to simple set the total battery energy to "1" and then model the inefficiency as a simple power law, i.e. $latex 1-{{k}_{1}}\cdot v_{{Ship}}^{{{{k}_{3}}}}&s=-1$, where k1 and k3 are fitted parameters, and vShip is the speed of the submarine. 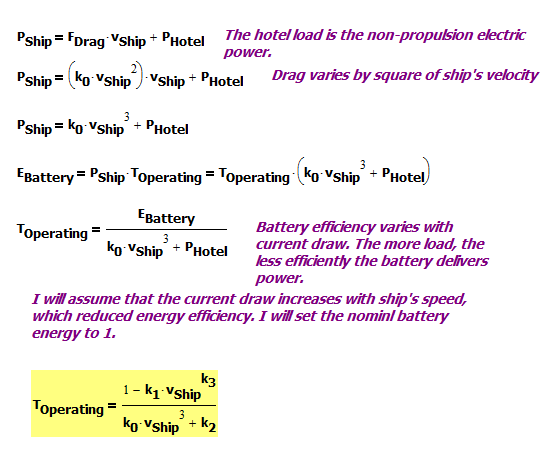 Digitize Figure 1 and Fit a Model

I digitized Figure 1 using Dagra and then performed a curve fit to Equation 1 using Mathcad (Figure 3). 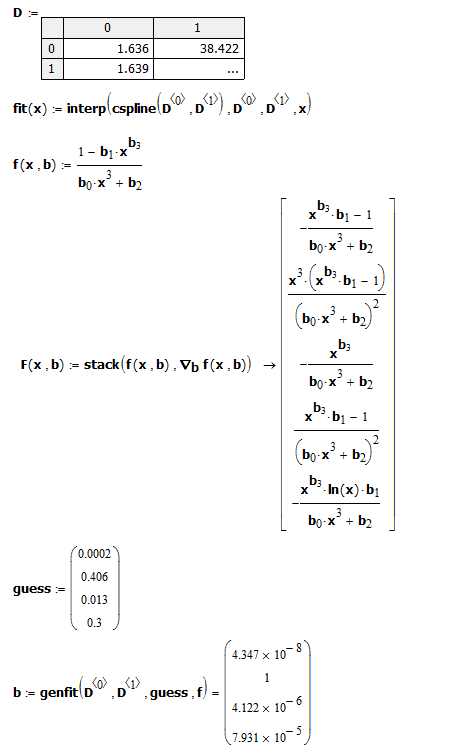 Graphical Comparison of Figure 1 and Equation 1

Figure 4 shows the raw data capture and my fitted model – the agreement is excellent. So the Gato data is consistent with other submarine battery data I have seen. 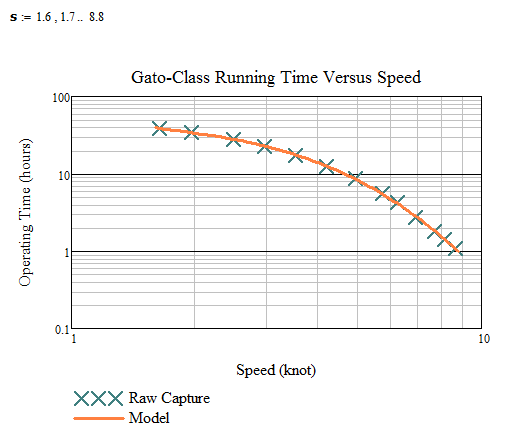 I fitted the running time of the Gato class to my usual model for submarine battery endurance with good results. I will be using this model to build some simple tools to help me with my submarine gaming adventures.

This entry was posted in Naval History. Bookmark the permalink.