A Little Analysis of a Visible Exoplanet

Everything comes to he who hustles while he waits. 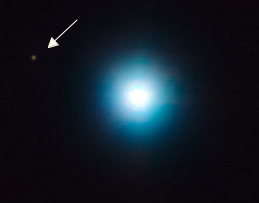 Figure 1: Image of CVSO30c From The
Very Large Telescope in Chile (Source).

I saw an article in the popular science press about a real rarity – an exoplanet that can be seen (Figure 1). I dug around the web and found the journal article on which most of the press articles were based. Given their measurement data, I wanted to see if I could duplicate some of their computed exoplanet characteristics. In this post, I will be using some of the techniques learned about while listening to The Search for Exoplanets: What Astronomers Know.

Much of the data that astronomers are gathering is obtained using the transit method of exoplanet detection. While this is a powerful technique, it can only be applied to about 0.5% of the star systems we can view – systems that are edge-on to our field of view and where eclipses can occur. While not a general method, the transit method has been used by the Kepler spacecraft to find over 1000 confirmed exoplanets, which is impressive considering that considering that Kepler stares at a fixed set of ~145K stars (i.e. a tiny portion of the sky).

I include a copy of my Mathcad source here.

I have covered exoplanet detection and analysis methods in other posts. Here is a list of my previous posts:

For planetary systems that are close to ours, astronomers can use transit and radial velocity methods to cross-check their estimates. This also helps to reduce the effects of systematic errors.

The journal article mentioned above provided the following measurements of CVSO30 and CVSO30c. 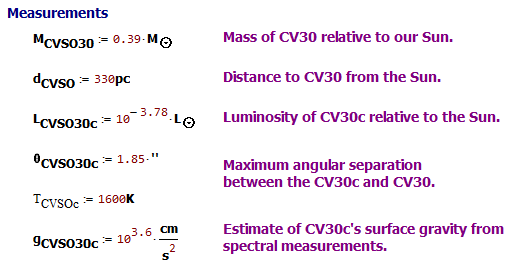 I should point out that some of these measurements are based on spectra (e.g. surface gravity), which requires quite a bit of light to generate. As I mentioned in this post, the amount of light available from even nearby stars dribbles in at a handful of photons per second. This makes these measurements very time consuming.

Figure 3 shows the basic astronomical formulae needed to compute some exoplanet characteristics. Note that I did not include the formula for estimating the distance between the exoplanet and star, $latex \displaystyle {{d}_{{CVSO30c}}}={{\theta }_{{CVSO30c}}}\cdot {{d}_{{CVSO}}}&s=-1$, because it is simple enough that I just recalled it from memory.

Figure 4 shows all the units and constants I used for this analysis. The values all came from the Wikipedia. 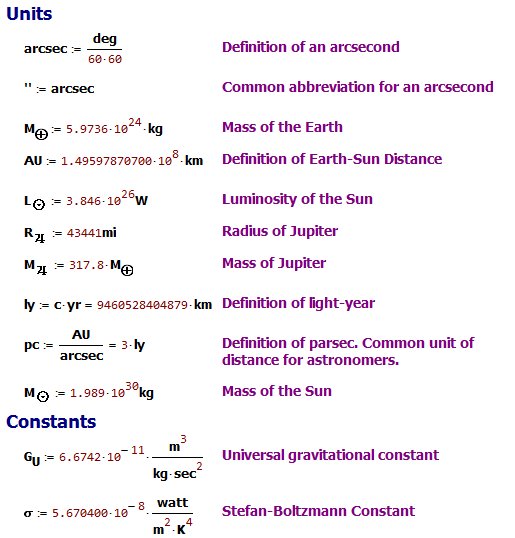 At this point, all I need to do is substitute the measurements into the utility functions. Figure 5 shows the results of these calculations. My results are very close to the values in the referenced journal article.