Posted on 11-September-2021 by mathscinotes

Why the US Navy performed so poorly in sea battles during the early part of World War II:

— My paraphrase of Capt. Wayne Hughes from his book Fleet Tactics. 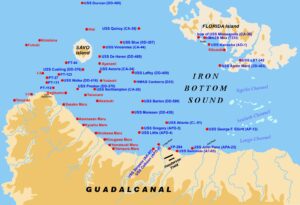 I just finished watching a series of videos on the Guadalcanal Campaign by Drachinifel, whose work is superb (Figure 2). The marines derisively referred to this campaign as Operation Shoestring because of the resource limitations. Things were no better for the sailors. Unlike many WW2 island campaigns, more sailors died in the battles than ground troops (link). The Allies, and in particular the US Navy (USN), had to learn the hard way that the Imperial Japanese Navy (IJN) was a force that deserved respect. Many Allied ships were sunk while learning this lesson.

Ironbottom Sound was called Savo Sound before WW2, but the number of ships sunk there was so staggering that the sound is now commonly called Ironbottom Sound. This post will extract the names of the sunken ships from the image in Figure 1 using an Online Character Recognizer (OCR). I will then create some tables that look at the casualties by ship type and country of origin.

I am looking at the ships listed in Figure 1. Some ships officially listed as lost at Guadalcanal are not shown in Figure 1. For example, the USS Benham is not shown but was seriously damaged on 15-Nov-1942 and ended up being sunk by Allied gunfire. The USS Jarvis and USS Juneau are also not shown. I do not know why, but their locations may not be known.

The video shown in Figure 2 provides a good overview of the Battle of Savo Island, which may be the worst loss in USN history and contributed four wrecks to Ironbottom Sound. The tale of this battle highlights many of the issues that the Allies would need to resolve quickly

This battle also shows the importance of leadership. If you want to see an example of how not to lead a naval force, read about Captain Howard Bode.

I used the online and free Convertio tool to generate a spreadsheet of all the text in Figure 1. I needed to delete the lightly colored geographic names from the conversion.

Once the OCR was cleaned up, I augmented the image data with naval service and ship type information,  and then made pivot tables of the result.

Figure 3 shows the number of wrecks by the naval service. Notice how the USN took a real beating. 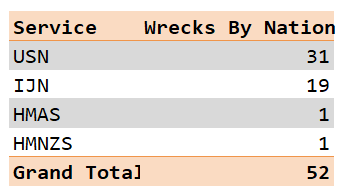 Figure 4 shows the wrecks by the type of ship. As far as the military ships go, destroyers and cruisers dominate the losses. I should mention the loss of the oiler Kanawha. The oilers were critical to the US Navy maintaining its tempo of operations. The US Navy early in WW2 was seriously short of oilers, particularly fleet oilers capable of Underway Replenishment (UNREP). For example, the loss of the fleet oiler USS Neosho at the Battle of Coral Sea was considered almost as serious as the loss of the carrier USS Lexington. 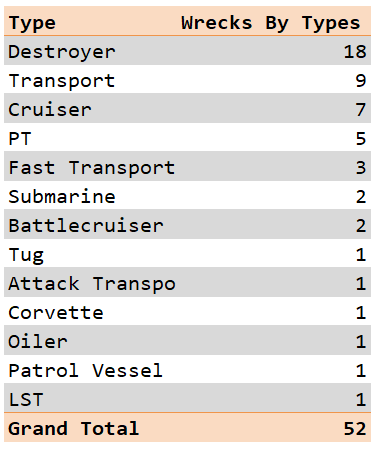 US Navy Wrecks By Type

Figure 5, shows the US Navy wrecks by type. Of the seven cruisers wrecks at Ironbottom Sound, six are from the US Navy and the seventh is Australian. The US cruisers really took a beating, particularly from torpedoes like the IJN Long Lance. 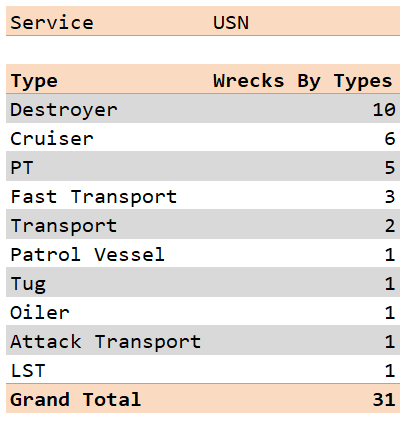 Figure 5: US Navy Wrecks By Type.

While the Guadalcanal Campaign was a brutal battle, there were some lessons that probably could not be learned any other way than through enemy engagement. Here are some of the key things that the Allies had to learn:

I would argue the USN, in particular, did not learn quickly. However, there are people who might disagree (Trent Hone in his excellent book Learning War).

Excerpt from Battles That Changed American History: 100 of the Greatest Victories and Defeats by Spence Tucker (link).

This entry was posted in Excel, History Through Spreadsheets, Naval History. Bookmark the permalink.