Just because you had it rough does mean you need to inflict that mentality on subordinates – there's no pride to be had in suffering for the sake of suffering. Subordinates do not need to carry your burdens to have high quality of work ethic.

— Slide from Air Force briefing on training. I could not agree more. I have seen far too many people made to suffer because someone just wanted to be cruel.

I recently read a book called Boyd: The Fighter Pilot Who Changed the Art of War that documents the life of John Boyd, a fighter pilot who was critical to putting fighter aircraft design on a firm mathematical footing now called Energy-Maneuvering Theory. He was a key member of the Fighter Mafia, a group of military and industry experts in the 1970s that advocated for a lightweight fighter alternative to the large, heavy fighters like the F-111 and MiG-25. Their concepts played a significant role in the final designs of the F-16 and F-18.

Boyd also had an impact on modern management with his advocacy of a nimble decision-making strategy called the Observe-Orient-Decide-Act (OODA) loop that has become doctrine in many military, legal, and corporate circles. I certainly encountered this approach in numerous corporate management situations.

One fighter metric that Boyd used was called the fuel fraction, which is defined as the ratio of fuel weight to the plane's take-off weight.  In theory, this metric should provide an indication of the range of the fighter. I became curious as to how the fuel fraction of WW2 fighters compare with modern fighters. No sophisticated data analysis here, just some simple digging in various airplane databases and putting the data into a spreadsheet, which can be downloaded here.

There are numerous terms in the specifications that are not always used consistently. Here is my take on these terms.

Combat Radius
Out and back range of an aircraft loaded for combat, including a budgeted time for combat. There appears to be no standard definition for this term, so it cannot be used to compare different aircraft.
Empty Weight
The empty weight of an aircraft is the weight of the aircraft without passengers or fuel, but with unusable fuel, full operating fluids, and full engine oil. (link)
Ferry Distance
For the purposes of this post, the one-way range of an aircraft without drop tanks. The aircraft is configured for maximum range and has minimum or no weapons load. You will find references that do refer to ferrying aircraft during wartime with drop tanks. I have tried to find references for ferry range that did not use drop tanks.
Fully Loaded Weight
Takeoff weight of an aircraft under normal circumstances, which includes fuel and typical weapons load.
Transfer Distance
Same as ferry range.

I thought my research would involve simply reviewing various aircraft specifications. However, few sources agreed on any of the specifications for range. I ended up taking the minimum ferry distance from contemporaneous military sources or books on these aircraft. Once I had the ferry range, I simply divided the internal fuel weight by the takeoff weight to get the fuel fraction.

For this exercise, I examined some of the most common US fighters, plus the Japanese Zero. I added the Zero because it was famous for its long range.

I should note that WW2 fighters often used drop tanks for both combat and ferry flights. There were numerous drop tank configurations and I decided to focus on the internal fuel capacities and on the one-way maximum range on internal fuel to keep things simple.

There is nothing sophisticated in this work – simple research, organizing, and plotting. Figure 2 shows my scatter plot of a small sample of WW2 fighters.

I was hoping to see a correlation between the ferry range and fuel fraction, but I see no strong relationship. It is interesting to note that most of the fighters had fuel fractions around 12%, which is much less than the fuel fraction of modern jet fighters. 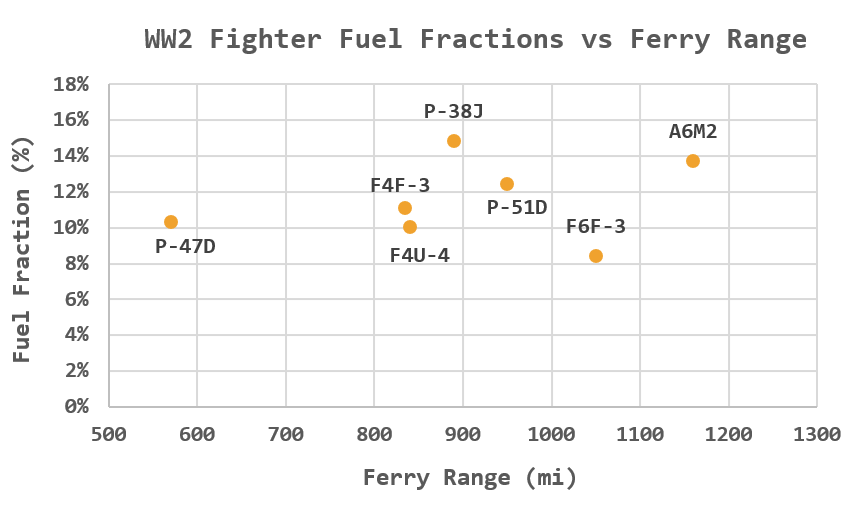 It is interesting to note that the two fighters with the longest ferry range were the F6F-3 (Hellcat) and the A6M2 (Zero). These were fighters designed specifically to operate from carriers in the Pacific where distances were very long. Note that the fuel fraction of the Hellcat was relatively low, while the fuel fraction of the Zero was relatively high.

The fuel fractions for US fighters during WW2 appears to be  ~12%, which is substantially less than the ~30% value often seen with modern fighters.

This entry was posted in Excel, History Through Spreadsheets, Military History. Bookmark the permalink.